What Color is Your Cleansuit?

Edit
watch 01:23
Wiki Targeted (Entertainment)
Do you like this video?
Play Sound

What Color is Your Cleansuit? is the first episode of Season 5 and the overall fifty-sixth episode of The Venture Bros.

This is the second feature length episode, taking place the day after the boys' "Homeschool Prom" in the 2011 episode Operation P.R.O.M. The episode starts off with Brock Samson and Shore Leave arriving at the crash site of the hijacked limo to confirm the deaths of both Molotov Cocktease and Monstroso, but when they arrive at the scene, there is nothing to be found but Mol's Soviet chastity belt and a life-size inflatable replica of Monstroso, confirming their successful escape. Meanwhile, Dean is dropped back off at the compound after the incident from the night before by The Outrider. Dean returns to his room to lecture Hank on his abandonment only to realize that Hank spent the night at Dermott's, and is woken up by Dermott's sister/mother, Nikki Fictel. The episode then cuts to Sergeant Hatred's old house in Malice; Hatred arrives with the bound-and-gagged Princess Tinyfeet, ready to rekindle their relationship, only to notice that the locks have been changed, and the door is answered by Scorpio, PT's new kinky lover. The Monarch and Dr. Mrs. The Monarch arrive back at their house in Malice; as the two are about to enter their home The Monarch waits at the door waiting for Henchman 21 (Gary), who quit the night before.

Gary (now a new member of the S.P.H.I.N.X. team) awakens in the HQ surrounded by members of the O.S.I. along with Hunter Gathers (the new commander of the O.S.I.) Brock and Shore Leave return, and are immediately reinstated by Gathers to O.S.I., leaving S.P.H.I.N.X. to Gary who becomes the new S.P.H.I.N.X. commander and its sole member (since he was unable to get "grandfathered" in to the O.S.I.)

Rusty Venture receives a phone call from Jonas Venture Jr., informing him of the urgent need of the Gargantua 2's Ray Shields that Rusty has supposedly been working on - J.J. will need them up and running in less than three months. Out of desperation, Doc convinces Conjectural Technologies (Billy Quizboy and Pete White) to help build the Gargantua 2 Rayshield with him. With the lack of funds from Venture Industries, Doc asks a wealthy investor (Augustus St. Cloud) to lend money for his new project, Project Palaemon; this angers Billy, for St. Cloud is his official nemesis. Meanwhile, Dean is going through a new stage in his life, dyeing his hair jet black and torching his Learning Bed, his old sweater vest, his Bizzy Bee wallet, his Spider-Man pajamas, his Giant Boy Detective books, and most tragically of all, Mr. Reachy. This continues a serious period of depression exacerbated by his falling out with Triana and learning that he is a clone.

Doctor Venture orders a clean-up of the old Venture Bio Dome, while Dean moves into the attic and Hank redecorates their old room. Dean and Hatred are sent out to recruit grad students at the local university for internship positions on Project: Palaemon; the first student to show interest is a girl named Thalia, whom Dean is smitten with immediately.

After a few weeks have passed, Doctor Venture has enough applicants for his new project; he organizes them up into three groups organized by different colors of Cleansuits, representing different fields. White Cleansuits represent Development, Orange Cleansuits represent Manufacturing, and Green Cleansuits represent Doc's "Special Class" (Rusty's new personal slaves). After an initial equipment hiccup/explosion, the interns get fast to work on the shielding; within a few days they produce a prototype. Although off to a promising start, the prototype fails the second impact test. Doc then realizes the amount of radiation used in the ray shields and quickly leaves the testing area. Meanwhile, The Monarch undeniably misses Henchman 21.

After a few more weeks working with the ray shields, the grad students are starting to slowly mutate due to the radiation levels of the shield's capacitors which affects most of the students (with the exception of the Green Class, as they take no part in the development or manufacture of the shields) in different ways. Dean's new love interest Thalia is the first to reveal a mutation - a second set of working arms located at her midriff. At the same time, Augustus St. Cloud inquires about a permit to arch with The Guild of Calamitous Intent, with the sole intent to arch Billy Quizboy, since their rivalry is long and bitter. He manages to bypass the Guild's usual waiting period and the normal function of assigning him a random nemesis by bribing the Guild with a large amount of money.

Meanwhile Billy informs Doctor Venture of the mutations occurring with the White and Orange Class (White Class displaying extra limb growth, hair loss and brain mutation giving them the power of telepathy, telekinesis and super-fast thought processing, and Orange Class displaying from muscle and skin mutations which give them superhuman strength and making them virtually invulnerable) also the fact that Hatred now has a pair of mutated breasts. Shortly after, The Monarch (who still believes Henchman 21 is still working undercover) goes to meet with Gary, who tries to convince him that he really has quit henching under him.

After a few more weeks of the mutation epidemic, Hatred witnesses a member of the Orange Class devour one of Doc's Green Class and is captured and brought into the living quarters of Project Palaemon, known as E-DEN, where the mutated grad students have created a civilization of their own. They are ruled by former White Class student Martin Doe, who plans on using the Gargantua 2 ray shields to take over the world. Hatred is trapped in the Bio Dome along with the last surviving member of Green class, Doc's head member Tommy, who informs Hatred of the legend of a savior know as the Lee-Hun-Took who will bring the Palaemons to Peace. Thalia informs Dean of the situation and convinces him to challenge Martin in order to stop his evil plot and become the Lee-Hun-Took.

The Monarch discovers Doctor Venture is (accidentally) creating a race of super humans through the DNA of a Cleansuit he stole from a White Class Palaemon (whom he murdered, mistaking it for a Venture Brother). He then tries to convince his wife to make him a better race of super humans. Meanwhile, Doctor Venture and Co. discover a list of demands called The 94 Theses, pinned to the door of E-DEN, which foretells the upcoming plan of world domination; Gary seizes the opportunity and coordinates a team consisting of Dermott (Code-named: Lurch) and Hank (Code-named: Boyband) Doctor Venture (Code-named: Papa V) and Pete and Billy (Code-named: Blondie and Shorty) who work on making sure that the Rayshield is delivered on time (and saving the world).

While the new makeshift S.P.H.I.N.X. team works on their mission, Sergeant Hatred is being tortured by the Palaemon Leader, Martin; Dean and Thalia appear and Dean challenges Martin for leadership of the Palaemons. Dean chooses the Challenge of the Way of the Indian (this includes an Indian SunBurn challenge, the Indian Feast challenge, and the Indian Leg Wrestling challenge). The Monarch and DMTM discover a second scientist who was the first to test radiation in a compact environment, a one Dr. Paolo Salazar, once the world's foremost authority on genetic mutation. After suffering from an accidental blast of super magnetized plasma ions which crossed him with a beetle, the mutated Salazar became a super villain named Bug-A-Boo who (at to which point the Monarch is unaware of) was creating an antidote to cure his mutation.

As the episode progresses, Billy and Pete break in to St. Cloud's mansion in order to retrieve a piece of equipment that Doc sold him in order to obtain the funds for Project: Palaemon; they fail their mission of stealth and are caught by St. Cloud who offers to give Billy and Pete the Floating Platform Device if Billy can either 1: Eat $1 worth of pennies (the amount apparently "sniped" by Billy to outbid St. Cloud on an eBay auction) or 2: beat St. Cloud in a trivia contest. Billy chooses the second option, defeats St. Cloud, and wins the Device (as well as the H.E.L.P.eR-Walking Eye combo robot). Dean also wins the Challenge of The Way of The Indian and becomes the Lee-Hun-Took, the new leader and savior of the Palaemons.

Doctor Venture has been working on an "antidote" to cure the Palaemons (which he describes as a combination of roofies and antibiotics); simultaneously, the Monarch has been planning to destroy Venture's race of mutants with his own superior race of mutants, which Dr. Mrs The Monarch has been working on in secret. The Palaemons have an Ewok-inspired celebration, but the Murderous Moppets (Tim-Tom and Kevin) infiltrate E-DEN to put the Monarch's plan in motion by cutting a hole in the biodome big enough to deploy his own super mutant army.

The Monarch reaches E-DEN and is spotted by Gary, who tries to stop him from ruining his own plan, but to no avail. Rusty releases his "Antidote" into the ventilation system of E-DEN, while simultaneously the Monarch deploys his "army of super mutants"; the latter is surprised as his "Army " is a flock of Electronic Butterflies. Dr. Mrs. The Monarch reveals that they contain the antidote that was created by Dr. Palos Salazar (also revealed, and shown to be completely human again) which reverses the effect of the Palaemon mutation. Dr.Mrs.The Monarch then gently states that "You don't fight fire with fire; you fight it with water", as Dr. Venture's "super mutant army" is neutralized.

In the stinger, J.J. Venture comes to collect the ray shield, and deems Project Palaemon a success (unaware of any of the events that happened). Due to Rusty's antidote gas, none of the grad students nor Dean remember any of the ordeal that took place. The Cocoon also gets a small dose of Rusty's "antidote", leaving its occupants with their memories intact, but still intoxicated and giddy.

Connections to Other Episodes[]

The Doctor Is Sin

The Invisible Hand of Fate

Everybody Comes to Hank's

Buck Rogers in the 25th Century

The Lord of the Rings 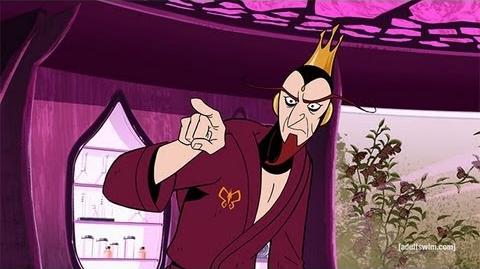