Warriana is a member of the Crusaders Action League. She is apparently an Amazon. She has black hair, and is uncommonly tall and strong.

Warriana has a civilian identity of Alexis Warrington, the host of a current affairs television talk show. It is unclear if this is her real name or an identity that she has adopted.

Warriana first appeared in Hostile Makeover where she encountered the Venture family after Dr. Venture and his sons moved into VenTech Tower. Warriana, along with other members of the Crusaders Action League, approached Dr. Venture and attempted to get to him to enroll in their protection plan. Warriana pointed out the dangers posed to Venture by the close proximity of Tophet Tower, the home of Wide Wale.

The next night, when shots were heard coming from VenTech Tower, Warriana (who was conducting a patrol on her invisible flying chariot) was quick to respond. She was accidentally clothes-lined by the zip-line that Hank Venture had fired from VenTech Tower to Tophet Tower, and she landed on Manolo's van, crushing the roof in. While she was not injured, this delayed her involvement in the fight between the CAL and Brock Samson. She eventually arrived and subdued Brock with her Truth Lasso. As he was restrained he remarked "I don't care about the breast thing, I wanna do you!", as she smiled at him. At Stars and Garters' orders, she releases him and while leaving she flirtingly addressed Brock as "Gargarean".

In Rapacity in Blue, she is shown flying around the city in her chariot where she spots Brock Samson arguing with the villain Haranguetan. She intervened and subdued Haranguetan, which annoyed Brock. They then engaged in some verbal sparring with Warriana now mockingly referring to him as "Heracles". Later than night, Brock (under the influence of God Gas) sought out Warriana at her home in Tophet Tower. He declared his devotion and willingness to submit to her, and she took him into her apartment.

In Tanks for Nuthin', she awoke before Brock and was uninterested in talking as he left. That evening, she interviewed the Pirate Captain (in her civilian identity as a TV talk show host) regarding a controversial video that had surfaced online of Billy Quizboy behaving erratically under the influence of God Gas. She claimed that this reflected badly on VenTech and the Pirate Captain argued with her. When Brock was launched out of Ventech by Think Tank, Warriana rescued him and they discussed their relationship and reached an understanding.

She later helped Brock in his fight against Think Tank, after which Warriana and Brock officially became a couple.

In A Party for Tarzan, it is shown she and Brock are still seeing each other.

Warriana is a very proud warrior. She seems egotistical, but not vain. She is confident in her skills as a fighter, and seems disdainful of men in general.

Unlike the other members of the CAL (except possibly Night Dick), she seems more generous and willing to help citizens. An example of this occurs in Rapacity in Blue where, upon spotting the villain Haranguetan creating a disturbance outside Ventech Tower, she immediately intervened and knocked him out.

Warriana is super-humanly strong, as she is able to lift Brock Samson off the ground with apparent ease. She also has a degree of invulnerability, as she survives a fall from a great height onto a parked van with little-to-no ill effects. It has not been established if she is immortal, or extremely long-lived.

Relationships to Other Characters[edit | edit source]

Warriana appears to be the only female member of the Crusaders Action League. She was disdainful of the group's leader Stars and Garters when it became clear that he had not done his research about the Ventures' protection needs (going so far as to publicly address him by his civilian name).

Warriana seems to be more altruistic than the other members of the CAL, as she was quick to respond to the commotion at VenTech Tower despite Dr. Venture refusing to purchase the CAL's protection. However, it was later revealed that she resides in Tophet Tower, which raises the question of how closely she is tied to Wide Wale and his criminal activities.

Warriana has some degree of familiarity with her teammates, as she allows Star and Garters to address her as "Ana".

Warriana was initially dismissive of Brock upon their first encounter and seemed to enjoy demeaning him. She subdued him with her Truth Lasso, and seemed to be interested in his declaration of desire for her. Upon releasing him, she addressed Brock as "Gargarean", which was an all-male tribe in Greek Mythology who were used by the Amazons to propagate their race.

Some time later, Warriana responded to Brock's street confrontation with Haranguetan by nonchalantly assaulting the villain from behind, then engaging is the same show of challenging bravado that Brock and Haranguetan had done. She now mockingly addressed Brock as "Heracles", the legendary hero of Greek mythology.

That night, when Brock fell under the influence of God Gas, he sought out Warriana at her apartment home in Tophet Tower (implying that he knew where to find her). He declared his devotion to her, and she (after a brief hesitation) brought him into her apartment for intercourse.

The next morning, Warriana awoke before Brock and was dismissive of him as he was leaving. That night, she rescued Brock after he had been shot off of VenTech Tower by Think Tank. They discussed their relationship and reached an understanding that they would become a couple. She then helped Brock to defeat Think Tank, and the couple returned to Warriana's home for more sex.

In A Party for Tarzan, it is shown they are still seeing each other. 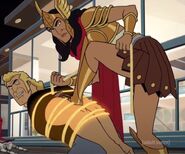 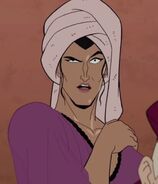 Brock meets Warriana at home
Add a photo to this gallery
Retrieved from "https://venturebrothers.fandom.com/wiki/Warriana?oldid=48784"
Community content is available under CC-BY-SA unless otherwise noted.