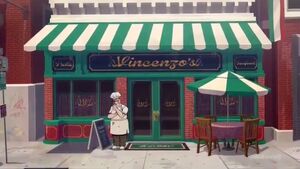 Vincenzo's is an Italian and seafood restaurant in New York City on The Venture Bros.

It is named after its chef and ostensible owner Vincenzo. Hank Venture formerly worked there as a delivery boy and waiter but was later fired after Wide Wale's Whale Lice goons pressured Vincenzo.

Wide Wale is seemingly only a favored patron of the restaurant, but in actuality he is the true owner of Vincenzo's.

Retrieved from "https://venturebrothers.fandom.com/wiki/Vincenzo%27s?oldid=41742"
Community content is available under CC-BY-SA unless otherwise noted.