Vendata was a villainous cyborg and a senior member of The Guild of Calamitous Intent. He was secretly Councilman 1 of the The Council of 13, the leaders of the Guild. Prior to becoming a cyborg he had been wealthy playboy Don Fitzcarraldo (a.k.a. the vigilante known as The Blue Morpho.)

Being a cyborg, Vendata appears to be more machine than man, showing almost no emotions and always being direct and "by the book", even during emotional events such as a funeral and he always speaks in a robotic monotone voice regardless of the situation. Despite having once been human, he appears to have lost interest in "romancing" and socializing with biological beings and now seems to be only interested in robotic beings. He was considered to be a "stick in the mud" or a "killjoy" by his fellow Council members.

During his supposed final moments, he made some hints about his past life, such as having a wife and being involved in an airplane accident, however the full details of his past were unknown.

As seen in Arrears in Science, Vendata has regained more of his memories and recalled his human life as The Blue Morpho. It is possible that his attitude was because of Dr. Z removing his memories and programming him to be evil. Vendata briefly lapsed back into human self and scolded Jonas for his manipulating of him in the past. He also showed that he still had love for his family as he called out to his now grown son The Monarch, who he was happy to see survive the airplane accident.

The history of Vendata's begins with another man, one known to the world as a rich playboy, and to a select few as the Blue Morpho.

Vendata's story doesn't quite begin in the plane crash that ended the Morpho's. Jonas Venture Sr. considered the man to be his friend, and used all the power of science he could muster to return him to life, and so Venturion was born.

It was not to last, however. Dr. Venture was a fickle man, and soon lost interest in his old friend, and the events that followed lead to the former vigilant being thrown into a dumpster, to later be found by a drunken Dr. Z. It is here that Vendata's story, at last, begins.

Taking him back to his own lab, the villain was shocked to see a human brain in the head of the automaton, and considered ending the wretched thing to put him out of his misery. Ultimately his pride won out; Dr. Z couldn't resist turning Venture's technology against him. Wiping his memory, Dr. Z rebuilt him, giving him new programming, and turning him to evil.

After Dr. Z was imprisoned on drug charges, Vendata made it to New York where he met Red Death and a small group of villains that later would attack Gargantua-1 on Movie Night.

In Bright Lights, Dean City, Doc's musical contained the lyrics, "The dreams I've buried with robot fingers, they linger!" When Doc sees Brock in Vendata's armor he shouts, "The metal murder man from my nightmares! He was real!"

Vendata was first shown when he was attending the funeral of fellow Council member, Clue Clown. Vendata then went on a date to a night club owned by Don Hell with a disguised Ghost Robot, who at the time was working for the O.S.I. Vendata was later attacked by Brock Samson who stole his armor after he followed him and the disguised Ghost Robot to the bathroom. A severely damaged Vendata managed to return to the night club's main room, but was shifting between his human memories and robot personality and seemed to be having flashbacks to a plane crash and missing wife. Vendata may have been damaged beyond repair, due to the guild asking Doctor Girlfriend to replace him. It is implied that he may have some ties to Major Tom or another failed project, as well as being The Monarch's father.

In Bot Seeks Bot, after the O.S.I. discovered Vendata's identity, Brock Samson went on an undercover mission which involved setting up Vendata on a date in order to try to get information about the other council members. This mission ended in failure and Brock had to beat Vendata in a bathroom in order to take part of his armor and escape dressed as him. Vendata was last seen with most of his armor and helmet removed, uttering odd sentences involving a wife and a plane crash before finally shutting down. It is currently unknown if this resulted in his permanent death, or simply a deactivation. The post credit scene of this episode, reveals that The Sovereign attempting to recruit Dr. Mrs. The Monarch to the Council of Thirteen and she responded that she would think about it. This has led to speculation that Vendata has probably been damaged beyond repair.

During season 6, he was considered "M.I.A." by the O.S.I., as confirmed by Snoopy. As seen All This and Gargantua-2 his photo is still shown in the Council of 13.

In Faking Miracles he was mentioned as a possible council member but as nobody has seen him since Bot Seeks Bot the council decides that they can not wait to see if he reappears.

In Arrears In Science, it is revealed that Vendata survived the night club incident, and slowly began regaining some of his memories as The Blue Morpho. He began his journey back to his old home at Newark, which took him four months. He arrived at his old home--which was now being renovated and inhabited by The Monarch--and went inside the Morpho cave, gradually remembering more things about his previous life. He realizes that he was The Blue Morpho, and attempts to take his old suit from the center cabinet. He notices the suit is no longer there, but remembers that Enzo made him a larger variant of the suit as his allergic reaction to Killer Drone's attacks had previously caused him to swell enormously.

Returning as The Blue Morpho, Vendata took the Morphomobile and flew to VenTech Tower to see Jonas Venture for assistance with his memory fragmentation. He found the PROBLEM, and immediately understood what happened to Jonas. He used a plug in his finger to connect to the PROBLEM, and met Jonas inside a virtual reality setting of Jonas' old office. Jonas explained how he got from Gargantua-1 back to Earth and they later reminiscent old memories, causing Vendata to realize what a horrible friend Jonas was to him. Vendata, now speaking as Morpho mentions how he hated that Jonas taped their orgy to threaten him with blackmail to make him do his dirty work, and how he took Kano as payment for helping him and his wife conceive a child. It is implied that Jonas may have impregnated Blue Morpho's wife. Jonas noted how he was talking as himself again as he realized it himself. Jonas also believes it was Vendata who pulled the lever on Movie Night at Gargantua-1, murdering the entire crew, including Jonas. Vendata did not believe this as he could not remember it.

Meanwhile, Jonas was also communicating with Rusty and Billy via wifi, and was trying to convince Billy to remove his brain and place it in Vendata's body. Jonas also saw Monarch approaching, and Vendata noticed this. He recognized Monarch as Malcom, calling him by his name as the latter was shocked. However, Jonas became angry and attached wires around Vendata as he wanted a new body for himself. The PROBLEM fell, and Vendata accidentally activated his rocket boosters on his legs. Rusty was stuck under Vendata, and Monarch hopped on to question him.

The four then flew to the skies of New York, only to shortly after crash back to the ground. Rusty and Monarch survived by landing on top of a balloon, but Vendata and Jonas crashed. Monarch ran up to him and asked in a hopeful tone "Daddy?" as Vendata weakly smiled at him before he seemingly died, again. 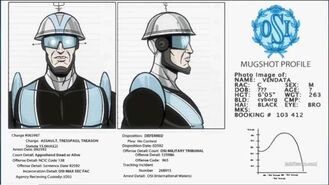 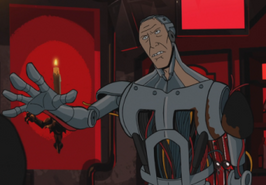 Vendata without his armor and helmet

Vendata with the infamous '67 Jill St. John/Stella Stevens sex tape.
Add a photo to this gallery

Retrieved from "https://venturebrothers.fandom.com/wiki/Vendata?oldid=48842"
Community content is available under CC-BY-SA unless otherwise noted.