VenTech Tower is a skyscraper located in New York City. It is the current headquarters of Venture Industries and VenTech on The Venture Bros.

VenTech Tower was originally known as the Col. Lloyd Venture Millinery & Automata Co. Building, and it still bears a plaque with that title at the main entrance. Under Colonel Lloyd Venture's stewardship it was the site of The Great Venture Millinery Fire of 1907, a deadly blaze that began in the attic when a dumpster full of felt straps was struck by a zeppelin.

During Jonas Venture Sr.'s lifetime the building was Venture Industries World Headquarters. During this part of its history the tower resembled the Pan Am Building from the 1960s.[1]

Sometime after the death of Jonas Venture Sr. the tower passed to Professor Richard Impossible, who converted it into One Impossible Plaza, the New York headquarters for Impossible Industries.[2]

Following his divorce from Sally Impossible, Richard Impossible became an unhinged recluse and his business fell into disrepair. During this time period the building served as the headquarters for The Revenge Society, which Richard Impossible had joined after Phantom Limb reached out to him.[3]

The building caught fire in Bright Lights, Dean City, prompting The Revenge Society to move their base of operations to The Monarch's childhood mansion in Newark (which they subsequently abandoned for Meteor Majeure.)

After Professor Impossible and The Revenge Society left, Jonas Venture Jr. took ownership of One Impossible Plaza and transformed it into VenTech Tower, making it his terrestrial base of operations for Venture Techno Industries. He restored the original factory facade on the first floor and the plaque reading "Col. Lloyd Venture Millinery & Automata Co. Building." Occupants at this time included JJ, Sally Impossible, Cody, Ned, and The Pirate Captain.

Following Jonas Venture Jr.'s heroic death in All This and Gargantua-2, the Tower and its contents passed to his brother Dr. Thaddeus "Rusty" Venture. Current occupants include Rusty Venture, Brock Samson, Hank Venture, Sergeant Hatred, and The Pirate Captain. Employees include Billy Whalen and Pete White.

Dean Venture initially lived in the VenTech Tower following his family's relocation from Colorado to New York, but moved out to live in the on-campus dormitories at Stuyvesant University after being accepted as a student there.

VenTech Tower employs a Security and Support Staff (including Sergeant Hatred and The Pirate Captain). The Tower features a residential area for Dr. Venture and his family that includes an aircraft landing pad and a rooftop patio with swimming pool. The building also houses Research & Development facilities, a reception area, conference rooms, and a spacious lobby featuring a Venture family history museum.

At least one full floor of the building is occupied by a Dummy Corp serving as a front for the O.S.I., as revealed by the episode The Unicorn in Captivity.

VenTech Tower is located across the street from Tophet Tower, the headquarters of the villain Wide Wale. Occupants of the two buildings can easily see each other though binoculars, telescopes, or other observational devices. 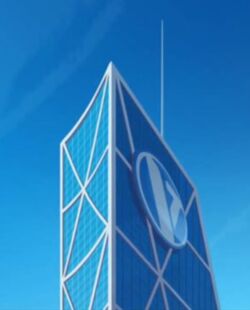 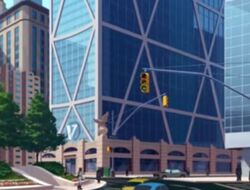 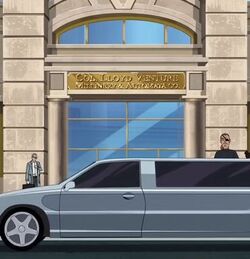 The Ventures arriving at the Tower's entrance. 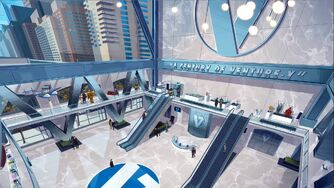 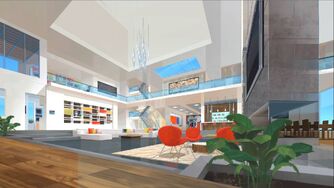 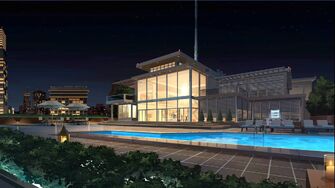 Rooftop deck and pool
Add a photo to this gallery

Retrieved from "https://venturebrothers.fandom.com/wiki/VenTech_Tower?oldid=48097"
Community content is available under CC-BY-SA unless otherwise noted.