View source
watch 01:55
Cobra Kai Season 4 - The Loop
Do you like this video?
Play Sound

The Sovereign was a major recurring villain on The Venture Bros. He was a shapeshifter and the leader of The Guild of Calamitous Intent as well as head of its governing body, The Council of 13. The Sovereign usually communicated through telescreen transmissions to hide his identity.

The true identity of The Sovereign is yet to be revealed, but he has many forms and guises. For a long time a handful of people (including The Monarch and Dr. Mrs. The Monarch) believed him to be the musician David Bowie as he attended Guild functions and events in this guise. However, according to Monstroso he was merely a "talented but down-on-his-luck shapeshifter" who met and formed a friendship with Bowie in 1972; as Monstroso noted, the Sovereign's true appearance was rumored to be either the "creature on the cover of Diamond Dogs" or the "woman beside Bowie on the cover of Pinups."

In his Bowie disguise, he has been known to hire Molotov Cocktease for special missions, and he was at the head of the trivia craze in 1980 or 1981 according to Roy Brisby. Despite the Sovereign's immersion in the scene, Brisby won Li-Li, a panda bear from him in the trivia contest.[1] At some point, he was a nemesis of Brock Samson over an incident in Berlin. As The Sovereign, he gave orders to Phantom Limb and officiated the villain team-up of The Monarch and Dr. Girlfriend.

According to what the Sovereign said to Phantom Limb in Pomp and Circuitry, he gained his position as leader of The Guild by killing his predecessor, Force Majeure.

It is later revealed that The Sovereign made a contract with The Investors in order to become leader of The Guild. Although the contract was unspecified, The Sovereign was terrified of owing his part of the bargain to The Investors and would eventually plot to have them killed before they could collect his debt.

In Arrears in Science, Red Death stated that the Sovereign impersonated SPHINX Commander to trick the OSI into believing that S.P.H.I.N.X. was responsible for the death of Jonas Venture Sr. and the crew members in attendance at the Movie Night massacre on the Gargantua 1 space station, thus launching the Pyramid Wars of 1987 and ensuring the elimination of The Guild's rival organization.

Phantom would eventually come to betray the Sovereign at the wedding of the Monarch to Dr. Girlfriend. The Sovereign attended the wedding at the Cocoon over Cremation Creek, along with his ostensible bodyguards Iggy Pop and Klaus Nomi, to give his blessings to bridge and groom.[2]

Phantom Limb's failed insurgency apparently left him greatly unhinged, for he later resurfaced under the alias of "Revenge" and counted upon a number of inanimate objects in his "Revenge Society". Phantom Limb infiltrated Guild headquarters and stole the Guild Charter. In an effort to capture the Orb, for which the Original Guild was established to protect, Phantom Limb went to the Venture Compound, only to find the Sovereign, Brian Eno, and the rest of the Guild already at the scene. Despite the Guild presence, Revenge got ahold of the Orb and confronted the Sovereign upon the Compound's front lawn. There Revenge called the Sovereign claimed rightful leadership due to his blood relation to Fantômas. However, the Sovereign revealed Fantômas to be a usurper and that Dean Venture, as a descendant of Colonel Lloyd Venture, was the rightful heir. Dean then passed leadership over to the Sovereign. In reaction, Revenge attempted to active the Orb, only to discover it was no longer functional. The Guild then took him into custody.[4]

Revenge eventually escaped from Guild prison and, seemingly recovered from his temporary lapse of sanity, reassumed his old guise as Phantom Limb[5] before establishing the Revenge Society as a true supervillain organization, with other actual supervillains.[6] The Guild of Calamitous Intent and the Revenge Society were at odds for a time, the Sovereign eventually reached a secret deal with Phantom Limb to allow its members to take over the Council of 13 if they robbed the Gargantua 2 and left a back door open for the Sovereign. In reality, this was all part of a grand scheme of betrayal for the Sovereign to eliminate all his enemies.[7]

In the special All This and Gargantua-2, after learning of the OSI's investigations of the Council, he arranged the deaths of all the members (save for Red Mantle, Dragoon, Dr. Z, Dr. Phineas Phage, and Dr. Mrs. The Monarch, who escaped). When he was confronted by Dr. Mrs. The Monarch while in the guise of Jonas Venture Sr. he revealed that he had orchestrated a plot to destroy the Gargantua 2 space station in an attempt to kill The Investors, the OSI, and the rest of his enemies all at once. When asked who he really is by Dr. Mrs. The Monarch, he stated "Just some bloke who wanted to be anyone but himself." Leaving her to die in the suite, he flew off in one of his many guises, that of an eagle. At the end of the episode, Headshot accidentally shot an identical eagle out of the sky, right outside The Sovereign's suite. The eagle's dead body fell into the lake, with Shore Leave commenting sarcastically, "Nice!" It is left ambiguous as to whether the eagle was actually The Sovereign, or possibly just a normal eagle.

In Hostile Makeover, when asked by other villains as to what happened to The Sovereign, Dr. Mrs. The Monarch confirmed his death.

The Sovereign's true shape according to Monstroso

The Sovereign in his David Bowie guise 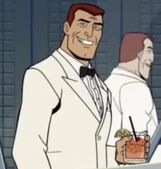 The Sovereign in the guise Of Jonas Venture Sr

Reacting to news of the Movie Night massacre