The Blue Morpho (real name:Don Fitzcarraldo) was a famous superhero that once saved the lives of the Original Team Venture. He was the Monarch's father.

Following his apparent death in a plane crash he was resurrected as the cyborg Venturion, then rebuilt and reprogrammed as Vendata, ultimately becoming Councilman 1 on The Guild of Calamitous Intent's Council of 13.

He is based on the fictional hero The Green Hornet.

He first appears briefly during a flashback sequence from Dr. Quymn, Medicine Woman, standing next to The Action Man. He is later seen with his wife and Dr. Jonas Venture Sr. in an old photo of the Monarch as a child playing with Rusty at the Venture Compound.

In A Party for Tarzan it is revealed that Venture Industries supplied Blue Morpho with some of his weapons, specifically his grappling gun. As a vigilante, The Blue Morpho never registered with the Guild of Calamitous Intent as a protagonist, which resulted in the guild placing a bounty on his head. The bounty was claimed in 1976 by an unknown person. It is also revealed that The Blue Morpho performed covert operations for Jonas Venture Sr., even going so far as to impersonate tennis great Billie Jean King and have sex with Dr. Z to secure a jade dragon.

During The Rorqual Affair, a person dressed up as him appears while driving the Morphomobile.

In Arrears in Science, it is revealed that he is not really dead but really the cyborg Vendata who regained his human memories from Brock's attack in Bot Seeks Bot. After regaining some of his memories and walks on foot all the way to his house, now inhabited by his son Malcom. While there he recalls more of his past memories, such as his identity as the Blue Morpho and changes into costume as well as taking the Morphomobile. He then goes to Venture home to confront Jonas Venture, to find him connected to the machine. It is there that he uses his own robotics to talk to him.

Jonas, once again saw it more as an opportunity to exploit him. He promised his friend that "science" could help his wife with fertility treatments and that his science was "potent". This either hints that he artificially inseminated her, without telling he was using his own sperm or given Jonas' lack of loyalty, he seduced his wife into an affair to conceive a child. Though even then, Jonas never did let it go.

Jonas stated they had a child a year later, in 1968. According to the Blue Morpho, he took Kano as "payment" for his "services". He also held the "tape" over his friend's head to blackmail him to do his dirty work. And he often didn't care what it was, something that even as Vendata, he vaguely remembered.

The Blue Morpho, along with his wife Mrs. Fitzcarraldo, allegedly died in 1976 when his plane crashed in the New Jersey Pine Barrens a few minutes after departing from Newark Airport. Though apparently a villain collected the bounty for that crash, it has not been stated who took the bounty. Their son Malcom (later The Monarch) was supposedly the only survivor of the crash.

It is revealed in Arrears in Science that The Blue Morpho was rebuilt by Jonas Venture as the cyborg Venturion on September 30, 1976, an act that was met with disgust from the original Team Venture. It didn't take long for Jonas to lose interest in him, resulting in the man who had saved Venture's life on at least one occasion becoming little more than a nanny for Rusty. Eventually, the boy awoke a bit of Blue Morpho's memories locked within Venturion. Watching the boy made him remember his crying son and parts of the plane crash, causing him to lash out and attempt to strangle the child on June 23, 1977. This forced Kano to snap Venturion's head off. This event traumatized Rusty and resulted in Kano taking a vow of silence.

Venturion was trashed and thrown in a dumpster outside the Venture compound. In the summer of 1977, Dr. Z, and two other villains called Shrill Specter and Scary Nilsson, were partying and decided to go out looking for kicks. He suggested they go arch Dr Venture, but found him to not be home at the time. The group decided to throw garbage on his lawn and call it an "arch". Dr. Z then found the broken cyborg inside a dumpster just outside the Venture compound. While rebuilding him, Dr. Z discovered he had a human brain inside his head. He considered putting him out of his misery but later admitted to enjoying using Venture's inventions against him and couldn't resist reprogramming Venturion. He seemingly erased all traces of his old life as a human, however, soon after his reprogramming was complete, Dr. Z was taken in police custody for drug possession. By the time he escaped prison, Vendata was already gone. But after his reprogram he went out on his own as the newly dubbed Vendata.

On his own, he became associated with other members of the Guild such as Red Death, Stab Girl, Laugh Riot, Mr. Fahrenheit the Supersonic man, and Hate-Bit. One night, Laugh Riot, at first jokingly, suggested they all arch Dr. Venture on Gargantua 1. Red Death reminded him that The Sovereign basically said no. Red Death revealed that Vendata was the "tactical genius" who planned for them to sneak onto Gargantua 1. The plan was for the group of villains to hijack the crew during "Movie Night" on April 9, 1987.

Only Vendata, Red Death, and Hate-Bit would survive the incident. During the hijacking, the pod bay doors were opened. Jonas, Gargantua's crew and most of the hijackers were pulled into space and suffocated, thus earning the attack the name "Movie Night massacre." Despite the insubordination, the Sovereign didn't punish the survivors, but instead used the calamity to strengthen the Guild's position. Masquerading as S.P.H.I.N.X. Commander, he contacted OSI to claim responsibility for the attack. OSI quickly and mistakenly retaliated upon S.P.H.I.N.X., triggering The Pyramid Wars of 1987 which ultimately wiped out the Guild's main rival. Over time, Vendata rose up the ranks to become Councilman 1.

Though no one knows who opened the doors, Red Death admitted he had his theories, hinting that he believed it was Vendata. B.M. doesn't remember or believe he would do it, only recalling that while his friends were planning their hijack, Vendata separated from the group to confront Jonas. He attempted to blackmail Jonas with the same tape with Jill St. John and Stella Stevens, the same way Jonas used to blackmail him.

Unfortunately, Jonas didn't take the threat seriously and even laughed it off, believing he had control of the whole situation. When he attempted to reprogram Vendata, Vendata threatened to open the doors. Jonas once more failed to take the threat seriously, merely giving a small speech about believing that Vendata was the Blue Morpho, and still had his memories, and would therefore do the right thing. He then put in the movie tape for Sharky's Machine and, right before exiting, told Vendata that if he chose not to come to movie night, "he knew the way out".

The Blue Morpho was apparently self-centered, egotistical and vainglorious, much in the same way that Jonas Venture Sr. was. Unlike Jonas, Blue Morpho did not want to be perceived as a hero, preferring to cultivate a public persona as an unpredictable vigilante.

Though it is hinted his friendship with Jonas may have been a bad influence on him, as he engaged in extra-marital trysts with seemingly no remorse. However, this was far from true as he felt guilty about the act and stated his love for his wife. He was also angry at Jonas deceiving him to most likely to sleep with his wife, which led to the birth of his son Malcom (later The Monarch). However questionable the parentage, Morpho still loved the child as his own son, which was made clear when he--as Venturion--strangled a young Rusty, either mistaking him for Malcom or remembering how Rusty made Malcom cry by taking his toy truck. When confronted by The Monarch, Morpho recognized his now adult son and called out to him. He also smiled at the latter before being shutdown. He was described by Dr. Z as a fast and loyal friend of Doctor Venture who was willing to do anything Jonas asked of him, no matter how dirty or underhanded. However, this was due to Jonas blackmailing him into taking care of matters no matter how sordid or obscene.

After regaining his memories as Blue Morpho/Vendata, he sought out Jonas (in the PROBLEM machine) to help with his memory fragmentation issues. When he saw memories of Jonas blackmailing him, he let out his resentment to Jonas while realizing he was himself again. Morpho was livid at having to be a lackey but still possessed a degree of care for Jonas since the latter did try to resurrect him, but again given how Jonas did use people, he quickly discared him when he grew bored with him. Whether he was guilty of killing Jonas isn't entirely stated, only hinted since even Vendata/Morpho can't remember. All that is remembered is that he loved his son and his need to protect him was still evident.

The moniker of the Blue Morpho was adopted by his son, The Monarch, after discovering the Morpho Cave under his childhood home. Unlike his father, however, the Monarch used this new identity to get rid of all the villains in line to arch Dr. Rusty Venture so he again can become his official arch-nemesis.

The Blue Morpho's headquarters was the Morpho Cave, which is located in a cavern beneath his home in New Jersey.

The Blue Morpho used several vehicles, including the Morphomobile and the aquatic Morpho Scooters.

The Blue Morpho and Kano had guns that could fire grappling hooks and tranquilizer darts. However, they were not averse to using deadly force, such as machine guns (hidden behind the Morphomobile's headlamps) and explosives. 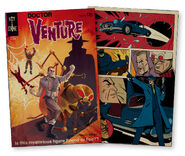