Edit
watch 01:55
Cobra Kai Season 4 - The Loop
Do you like this video?
Play Sound

The Alchemist (also known as "Al") is a member of The Order of the Triad, along with Dr. Orpheus and Jefferson Twilight.

The Alchemist first appeared in the episode Fallen Arches where it was hinted that The Order of the Triad had existed before, but was split up for an unknown reason. Before re-joining the Triad he was working on finding a cure for AIDS. He is established as being an open homosexual, and considers Dr. Orpheus to be his best friend.

Al moves into Triana's old bedroom after she moves out to go live with her mother, Tatyana. He remains at the Venture Compound until it is destroyed by fire in All This and Gargantua-2.

The Alchemist's powers have never been properly defined. In addition to a strong knowledge of science needed to research alchemy, he seems to possess a level of magical power similar to Dr. Orpheus, able to conjur up magical creatures or attack with mystical energy. He also seems to have the ability to discern when someone is lying or telling the truth, although this does not give him knowledge of the particular circumstances involved.

Relationships With Other Characters[]

Dr. Orpheus is a close friend and long time compatriot. When he temporarily loses his home at The Venture Compound, Dr. Orpheus and his daughter Triana come to live with The Alchemist. Al seems to enjoy the experience, even letting Triana dye his hair bright pink.

Originally, a short term boyfriend until Al got too possessive and forced Shore Leave to erase his memory. The two later rekindled during Hank and Dean's Home School Prom as they shared a kiss at the end of the episode. In O.S.I. Love You, the two are shown having a video chat implying they have started dating again. 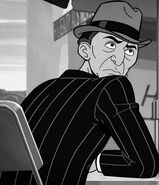