Thalia was a minor character on The Venture Bros.

Thalia appeared only in the episode What Color is Your Cleansuit? She is a friend of Martin and student who goes to State University. For the ever briefest of times, she and Dean were romantically involved.

In What Color is Your Cleansuit?, Thalia meets Dean Venture as he visits the campus of State University with Sgt. Hatred to recruit interns for the Palaemon Project. Bemused by Dean, Thalia signs up as an intern. Martin does as well. They are both assigned to research and development. As a consequence of working on the project in a heavily irradiated environment of the E-Den, both Thalia and Martin became mutations with radically altered bodies and telepathic abilities. Martin also happened to go "mad", as Thalia described it to Dean.

As a new society of mutant nerds matured over the next three months, their society quickly grew its own "SyFy original movie" (as described by the intern Tommy) type mythology and religion, including an apocalyptic transformation of the world's people into fellow mutants. Martin planned to use the Gargantua-2 Ray Shield to elicit this mutation. However, Thalia persuaded Dean to challenge Martin for power as Lee-Hun-Took through a series of unorthodox challenges. Dean won, becoming the prophetic savior and winning the affections of Thalia, whom intended to rule the world in a peaceful society with him. Dean was elated to be the Lee-Hun-Took.

Dean's revelry was short-lived, thanks to a combination of Dr. Mrs. The Monarch's genetically engineered anti-mutant monarch butterflies dropped in from the Cocoon and a foul gas concoction of "antibiotics and roofies" filtered through the air ducts by Doctor Thaddeus Venture. All of the mutant interns were returned to normal, and everyone inside fell into a drug high that made them forget everything about what happened. Both Thalia and Martin were returned to normal with only hazy dreams of what had happened. When Dean spotted her, he vaguely recalled kissing her but this was not believed by Dermott and Hank. 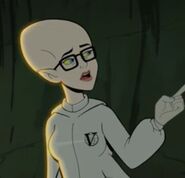 Thalia as a mutant

Tribal outfit
Add a photo to this gallery
Retrieved from "https://venturebrothers.fandom.com/wiki/Thalia?oldid=44086"
Community content is available under CC-BY-SA unless otherwise noted.