Teddy is a minor character from the Venture Bros.

First mentioned in Any Which Way But Zeus, Teddy provided the voice for the Teddy Talk-To-Me Doll. Later, in Momma's Boys, Hank Venture and Dermott had to seek out Teddy's aid in Dunwitch Asylum in order to help their addled father, Doctor Thaddeus Venture.

Years ago, Teddy provided the voice for the Teddy Talk-To-Me Doll. According to Gary Fischer (Henchman 21), Teddy was caught in a fire in one of the Asian doll manufacturing facilities. The incident shattered his mind, and he became a supervillain. (Henchman 21 speculates he "might have hugged Ronald Reagan too hard or something".[1]) In any case, he eventually wound up in Dunwitch Asylum.

Any Which Way But ZeusEdit

In order to spare Dr. Venture's feelings of grandiosity in the face of being ignored by Zeus in his string of kidnappings, Sgt. Hatred and the Venture Family arrange a fake kidnapping of their own. Dean leaves the doll "talking" with Dr. Venture, who believes it to be an actual person.

In this episode, it is revealed that Hank and Dermott have been regularly pranking Dr. Venture with calls on a prepaid mobile phone using the Teddy doll in order to go out late at night. Doc has apparently bonded with the teddy bear, thinking it is a dusthead who is otherwise innocent but whom has "fallen in with the wrong crowd."

A week later, Doc has began calling Dermott's prepaid cellphone every few minutes, exhibiting what Dermott notes as "doll withdrawal". Instead of telling Doc the truth, the boys let it play out. Unfortunately, this results in Dr. Venture becoming panicked that something bad has happened to Teddy. Thinking the Venture Compound has been bugged, Dr. Venture searches and finds the Talk-To-Me teddy bear. Meeting with the boys, Dr. Venture believes a (nonexistent in truth) villain named Grumpy Bandersnatch hid a record tape inside the teddy bear in order to record everything Teddy said. He enlists Sgt. Hatred' aid in order to locate Bygolly Gulch, where Grumpy Bandersnatch presumably holds Teddy captive.

Later, Gary Fischer suggests to the boys that they try to get the real Teddy's help by bailing him out of Dunwitch Asylum for the Criminally Obsessive. To do this, they get themselves committed as insane supervillains. Gary and Hank are taken to the asylum, whereupon they discover Teddy. He and Radical Left speak cryptically about "Momma" and it being Mother's Day, the day they will all become a family." Although Hank recognizes Teddy as Teddy Talk-To-Me, Teddy does not seem to recognize that name.

Before Hank can talk with Teddy further, Cuckoo Clocker begins punching the asylum guards and thereby starts a riot. In the aftermath of the riot, the guards are subdued and the inmates loose. "Mother" reveals herself to be Myra Brandish, whom has beguiled the asylum inmates into becoming her own personal cult. She has Dean captured and tied up, and she asks Big Time and Maybe Man if they will place him in her womb. This tips off Hank that she was never his mother. He calls her out that she's not their real mom either. Gary joins in, saying she's not his mother either. Together they incite a rebellion that breaks Myra's hold on the inmates. This includes Teddy, who assumes his Teddy Talk-To-Me persona. The asylum falls into chaos.

After Dean and Hank escape, Gary notes he wasn't able to find Teddy in the chaos. In truth, Teddy has escaped the grounds. Later, Doc Venture and Sgt. Hatred in Hatred's are hanging over the edge of Bygone Gulch in Hatred's jeep. They believe their doom imminent when they are surprised to see a figure extend a branch and tells them to grab it. The figure is (to Hatred's surprise, whom by now has figured out the boys' prank) Teddy Talk-To-Me. He calls Doc his best friend, and they embrace before Teddy says he must return to Lady Bugbear and all his animal friends in By Golly Gulch. As Teddy runs off into the night, Dr. Venture tells him to give "Lady Bug a slap on the fanny" for him.

When Dean and Gary first encounter Teddy in Dunwitch, he speaks in a somewhat ominous fashion and shows a devotion to Myra Brandish rather than any identity of his own. Once Myra's lies are exposed, he assumes a benign (if delusional) identity in that of his character, who "just wants to slide down rainbows."

Despite an alleged past as a supervillain, Teddy seems only to show good will and benevolence to Doctor Venture before disappearing into the forest. 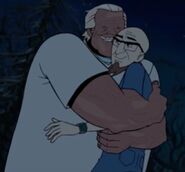 Teddy hugs Doc after he saves him.
Add a photo to this gallery

Retrieved from "https://venturebrothers.fandom.com/wiki/Teddy_Talk-To-Me?oldid=45971"
Community content is available under CC-BY-SA unless otherwise noted.