Swifty is a minor recurring character on The Venture Bros.

Swifty was a prizefighting boxer employed by Jonas Venture Sr. at Venture Industries and once a member of the Original Team Venture. Eventually, Swifty took enough punches to damage his face and inflicted his mind with dementia. Swifty's wife abandoned him, and Jonas Venture Sr. put him to work in the west manufacturing wing along with Hector Molina.

Following Jonas Sr.'s presumed death, Swifty and Hector were eventually forgotten and left in the west manufacturing wing of the Venture Compound. They labored there for twenty years before Thaddeus Venture discovered them and quickly fired them.[1] 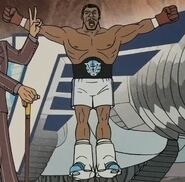 Swifty in his prime
Add a photo to this gallery

Retrieved from "https://venturebrothers.fandom.com/wiki/Swifty?oldid=48980"
Community content is available under CC-BY-SA unless otherwise noted.