Speedy was a minor character on The Venture Bros. He was killed by Brock Samson.

Speedy was an enthusiastic young henchman in The Monarch's Fluttering Horde. Desperate to "earn his wings", Speedy suggested that they kidnap Hank and Dean Venture.

Brock Samson grabbed Speedy by the throat while he was attempting to kidnap the Venture twins. Speedy's fellow henchmen were finally able to take Brock down after firing an extensive amount of tranquilizer darts and hitting him with a truck.

Despite being unconscious, Brock wouldn't loosen his tight grip around Speedy's throat. The other henchmen tried to save him with no success. When they realized it was futile they performed a mercy killing by shooting Speedy with a tranquilizer. Speedy's struggling ceased and he died, either from windpipe collapse or asphyxiation. 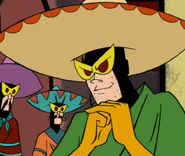 Add a photo to this gallery
Retrieved from "https://venturebrothers.fandom.com/wiki/Speedy?oldid=46540"
Community content is available under CC-BY-SA unless otherwise noted.