Shore Leave is an O.S.I. agent who once worked alongside Brock Samson and Hunter Gathers before going rogue and joining the newly revived agency of S.P.H.I.N.X. He is said to be a cross between Shipwreck (from the animated G.I. Joe series) and the late, legendary, Queen lead vocalist Freddie Mercury. In the Season Five episode What Color is Your Cleansuit?, he along with the other S.P.H.I.N.X. agents rejoined the O.S.I. under the command of the new general, Hunter Gathers.

Shore Leave, formerly known as Holy Diver was once an agent of the O.S.I. before he was supposedly forced out of the agency after a "don't ask, don't tell" beef. Afterwards, he joined his "partner" Sky Pilot (formerly Mile High), to lead the fastest growing youth ministry in southern California, The Action Bible School. When action is called for the two would join up and become the Soul Mates. Holy Diver suits up in bible-themed armor and , eventually, possibly, fights wrongdoings, mostly through prayer.

Shore Leave's supposed religious awakening was in fact a ruse to hide the fact he was an agent of S.P.H.I.N.X., formally a terrorist group, now being used by ex-O.S.I. agents to handle threats the O.S.I. was unable to deal with due to bearocratic complications. After Brock joined S.P.H.I.N.X., Shore Leave frequently found himself partnered with him on missions. He also found himself in a relationship with the Alchemist of The Order of the Triad, though this was sometimes complicated by Al's possessive nature.

After Hunter Gathers was assigned as the new leader of O.S.I., Shore Leave's disavowed status was revoked, allowing him to rejoin the agency.

Shore Leave is openly gay, and does his best to make sure everybody knows it. His personality is highly flamboyant, fae and aggressively catty. He is fond of giving people nicknames, sometimes insulting ones, but rarely means anything actively harmful.

Despite his playful personality, Shore Leave is a highly capable agent, proficient in both firearms and hand to hand combat. His preferred method of combat are twin pistols, accompanied by parkour and acrobatics.

Shore Leave has an athletic, muscular build, though not to the extent of Brock or Sky Pilot. He is very proud of flaunting his figure, leading him to wear as little clothing as he can get away with, with anything he does wear revealing as much skin as possible. He is rarely seen without an undersized sailor's hat sitting atop his head. Despite his brown hair, he sports a prominent black mustache. His forearm also sports an anchor tattoo.

After leaving the O.S.I., Shore Leave got his chest tattoed with a large anchor-like cross, in aid of his cover as a "religious nutjob". He also began "frosting" the front portion of his hair.

Shore Leave was first seen in the episode The Invisible Hand of Fate, where he and other O.S.I. agents mock Hunter and Brock for chasing after the Guild. He appeared again in The Family That Slays Together, Stays Together (Part I) as a rogue O.S.I. agent who is now living a Christian life with Sky Pilot (which turned out to be a cover). He along with Brock and Sky Pilot later joined SPHINX under the command of Hunter Gathers

Brock meets up with the Soul Mates while on the run in hope of using their boat to get the Venture family to safety on Spider-Skull Island. Unfortunately the duo refuse to use violence and Brock is attacked by the assassin Go-Fish. It was later revealed that "Holy Diver" and the Soul Mates were a cover to mask Shore Leave and Sky Pilot's involvement with the newly recreated S.P.H.I.N.X..

It was revealed in Everybody Comes to Hank's, that he had a romantic relationship with The Alchemist, but he erased the latter's memory when he got possessive and tried to move in with him after breaking up with his boyfriend. However, their relationship appears to have been fully rekindled by the end of Operation: P.R.O.M.

In What Color is Your Cleansuit?, Shore Leave and Brock investigate the wreckage of Molotov and Monstroso's limo and discover that the two have survived the crash and escaped. Later on, he and the other SPHINX agents are allowed to rejoin the O.S.I. after it is put under the control of Hunter Gathers who becomes the new General. In O.S.I. Love You, he and the other agents have tracked down Molotov and Monstroso before proceeding to capture them. He is then seen having a video chat with The Alchemist before being interviewed by government investigators who are later revealed to be The Investors. He also supposedly went through a short-lived, ill-conceived Madonna period. In Bot Seeks Bot Shore Leave takes the alias "Red Throated Loon" to infiltrate Don Hell's, a nightclub run by Don Hell, one of the Guild's Council of 13.

In All This and Gargantua-2, due to a tip given to Gathers by Dr. Z, Red Mantle and Dragoon he and the other agents discover the location of The Sovereign. The base explodes due to a self-destruct mechanism activated by The Sovereign before it could be infiltrated causing Headshot to accidentally shoot the fleeing Sovereign who was in his eagle form at the time, causing Shore Leave to remark "Nice" as the dead villain fell in the water.

Both Brock and Shore Leave knew each other when they were in O.S.I. Like other agents, Shore Leave mocked Brock and Col. Gather's belief in The Guild of Calamitous Intent and they had a contentious relationship. However, after joining S.P.H.I.N.X. the two of them have come to respect each other and become good friends.

Both Hunter and Shore Leave knew each other when they both worked for the O.S.I. Like many other agents, Shore Leave mocked Gathers and Brock's belief in the Guild of Calamitous Intent leading to a contentious relationship. However, Shore Leave came to work under Gathers' command when the latter revived SPHINX and the two have come to form a more friendlier relationship as Gathers often sends Shore Leave on missions. When the O.S.I. is put under control of Hunter Gathers, Shore Leave is allowed to rejoin the O.S.I. and continue to work for the latter.

For years, both Shore Leave and Sky Pilot lived under the cover of being a gay Christian couple. After joining S.P.H.I.N.X. and dropping the cover however, the two have not been seen interacting. Sky Pilot openly admitted he had to "pretend to be in love with Shore Leave", causing an offended Shore Leave to declare he "had to pretend I enjoyed having sex with him every night."

In Everybody Comes to Hank's it is revealed that he slept with the Alchemist but wiped his memory because he was getting possessive, and even broke up with his boyfriend to move in with him. In Operation P.R.O.M., they appeared to have reconciled their differences as they have a friendly argument about Dr. Ventures' first name and ultimately share a kiss at Hank and Dean's home school prom implying a relationship between the two in future episodes.

The two were seen Skyping during O.S.I. Love You showing they have gotten back together. 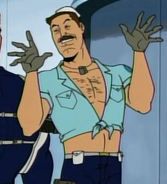 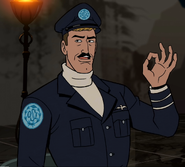 O.S.I. Aggression Envoy
Add a photo to this gallery
Retrieved from "https://venturebrothers.fandom.com/wiki/Shore_Leave?oldid=48572"
Community content is available under CC-BY-SA unless otherwise noted.