Scott Hall was a tragic supervillain on The Venture Bros.

Formerly Henchman 1 for The Monarch, he was shown to be one of his best and most competent henchmen until an unfortunate encounter with Brock Samson that nearly killed him. After recovering, he attempted to be his own villain (Henchman Zero) but failed miserably due to Henchman 21 thwarting him. Later on, he was inducted into The Revenge Society under the alias Zero.

In his first appearance, he goes on a mission with Henchmen 21 and 24 to infiltrate J.J.'s compound on Spider-Skull Island to install a video uplink (a Dark S-7 maneuver) with The Cocoon.[1] Throughout the episode they tease him repeatedly as they believe that, because he is the new guy, he's going to die on the mission to which he continuously denies. They leave him on Spider-Skull Island and he is presumed dead after a run-in with Brock Samson despite putting up a valiant effort against the OSI agent who proceed to seriously beat him.

However, he survived this encounter, and appears again in season 4 as the villain Henchman Zero, who kidnapped henchmen and sidekicks, because "they think they're heroes".[2] He tries to get revenge on Henchman 21 but he is chased down by his former prisoners, leaving his fate unknown.

Scott again survives this experience and is next seen as a new member of the The Revenge Society in the Season 6 special All This and Gargantua-2. He has dropped the title "henchman" from his name in favor of the moniker Zero while proclaiming "I hench for no man". He is seen at a meeting of the Revenge Society in their new base in which they discuss committing a large heist concocted by Dr. Henry Killinger. During the heist, Zero and Baron Werner Ünderbheit were responsible for raiding the vault onboard Gargantua-2. Incidentally, Brock Samson and Amber Gold were being held in the vault as trespassers. Zero immediately recognizes Brock, to whom he is hostile, while Brock does not recognize Zero at first. Eventually, Brock recognizes Zero and begins to taunt Zero about the beating he gave him in Season 4 and how he believed he had got the guts to become his own villain but failed miserably.

Zero then draws a pistol and points it at Brock, stating that he was going to kill Brock on behalf of all the henchmen that Brock has murdered. An asteroid then hits Gargantua-2, causing Zero to become distracted, allowing Amber Gold to grab and break his arm. Hank walks into the vault to free Brock and Amber just in time to see Brock snap Zero's neck, finally killing him. 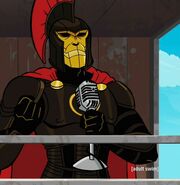 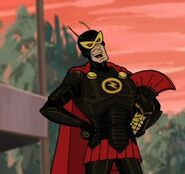 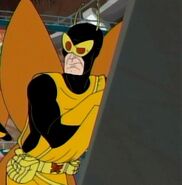 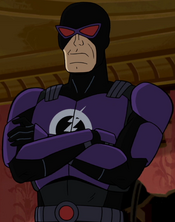 Scott Hall as Zero
Add a photo to this gallery

Retrieved from "https://venturebrothers.fandom.com/wiki/Scott_Hall?oldid=48989"
Community content is available under CC-BY-SA unless otherwise noted.