Scorpio is one of the many tertiary villain characters who have appeared on The Venture Bros. Like most villains, he belongs to The Guild of Calamitous Intent. Scorpio's villain theme is derived from the scorpion.

Scorpio seems to be an enemy of (or at least antagonistic to) Captain Sunshine, for Scorpio taunts Sunshine about Wonder Boy when they meet in Handsome Ransom. Flying into a crazed rage, Sunshine assaults Scorpio, leaving him beaten to a pulp. Since this first appearance, Scorpio has appeared in a number of other episodes.

In What Color is Your Cleansuit?, Sergeant Hatred returns with Princess Tinyfeet in bondage to what he thinks will be renewed love in their Malice estate. However, Hatred finds the locks have been changed and Scorpio is waiting inside inside, having been worried about his lover in her absence. Scorpio thanks Hatred for getting Princess Tinyfeet home safely and asks how much he owes him, to Hatred's surprise and disappointment. 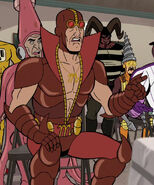 Scorpio shows off his necklace and belt in The Rorqual Affair
Add a photo to this gallery
Retrieved from "https://venturebrothers.fandom.com/wiki/Scorpio?oldid=48119"
Community content is available under CC-BY-SA unless otherwise noted.