View source
watch 01:55
Cobra Kai Season 4 - The Loop
Do you like this video?
Play Sound

Sally Impossible is a minor recurring character on The Venture Bros. She is the ex-wife of Professor Richard Impossible and ex-lover of Dr. Jonas Venture, Jr. She and Professor Impossible have a precocious young son named Rocket.

One day, while giving a tour of Impossible Industries to her visiting brother Cody and cousin Ned, one of Richard's experiments went wrong. As a result, Sally was imbued with the ability to turn her skin invisible, forcing her to concentrate really hard to keep it visible.

Because of her "condition" Richard rarely allowed Sally to go out in public, or even leave her room. Her isolation in Ice Station Impossible and at One Impossible Plaza eventually caused feelings of desperation, driving Sally to fall first for Dr. Venture, then Jonas Venture Jr. Her loneliness must have been apparent to even the normally self-absorbed Richard Impossible, as he accused her of sleeping around with any scientist who noticed her, causing him to question the paternity of their child, Rocket.

In Twenty Years to Midnight Dr. Venture took advantage of Sally's desperation, using her for access to One Impossible Plaza by leading her to believe that he wanted to rescue her and be her romantic partner. His ruse worked until Professor Impossible captured them. By the end of the episode Sally left her husband for Jonas Jr., moving with him to Spider-Skull Island along with her cousin Ned and her son Rocket.

Sally met Dr. Venture in Ice Station Impossible. She was attracted to him because of his carefree attitude and glaring imperfections. To help him pass a drug test--which his "diet pill" addiction would otherwise cause him to fail--she gave him a sample of her own urine. When Professor Impossible tested the sample, it was revealed that Sally was pregnant.

In Twenty Years to Midnight Dr. Venture used Sally's desperation to his advantage to get inside Impossible Industries. She quickly forgot about her attraction to Rusty when she met his brother, Jonas Venture Jr., and the two became a couple shortly thereafter.

Richard Impossible was Sally's husband and father of her son, Rocket. A botched experiment of Richard's is responsible for her invisible skin. Out of an apparent need to "keep up appearances" he prevented her from going out in public, which provoked feelings of isolation and desperation in Sally, who compared her life to imprisonment. In Twenty Years to Midnight it is revealed that he cares more about science then his family, which ultimately causes Sally to leave him for Jonas Jr.

Despite his cold and distant demeanor when they were a couple, Richard held a torch for Sally in his heart after she left him. He was opposed to the divorce and the idea of her moving on, becoming visibly upset when Sally's name was mentioned and even attempting suicide on Spider-Skull Island--either to end his pain or just to get Sally's attention. Professor Impossible ultimately became despondent after their divorce, living like a recluse in his office in One Impossible Plaza and letting the business affairs of Impossible Industries fall to pieces around him.

As a means of coping with his loss, Richard listened to his old Boys Brigade buddy Phantom Limb and joined his new Revenge Society. Richard never fully got the hang of being a supervillain, hesitating during a heist on Gargantua-2 and nearly stopping when Sally approached him as a passenger and asked the Revenge Society to quit their attack. When everyone began to evacuate Gargantua-2, Sally urged him to leave with her. Richard eagerly hoped that this meant she'd take him back. However, Sally replied that she only wanted to help because she felt their son didn't deserve to lose his father.

Richard was present at her side during J.J.'s funeral. She most likely let him come as emotional support. It could be hinted that he at least let his feelings of J.J. go to show respect for Sally.

Sally fell for Jonas Jr. in the episode Twenty Years to Midnight. She moved to Spider-Skull Island, along with her son Rocket and cousin Ned, to live with him.[1] After J.J. turned the island into a museum[2], the family moved to the VenTech Tower in New York City, where they occupied the penthouse. This was a return for Sally, as the VenTech Tower had previously been her home when it was One Impossible Plaza, prior to her leaving Professor Impossible and The Revenge Society accidentally burning it down.[3]

It was never stated whether Sally knew Jonas Jr. was dying from his cancer or not. She was very distraught when J.J. sacrificed himself on Gargantua-2 to let everyone else escape from its destruction. During his funeral, his lawyer revealed that J.J. left Sally a generous inheritance and the rights to Spider-Skull Island.[4] Sally, Ned, and Rocket moved out of the VenTech Tower after the funeral and returned to Spider-Skull Island, where they now make their home.[5]

Even after his death, Jonas Venture Jr.'s love for Sally is apparent. Aside from making sure in his will that she was well cared for, J.J. also left daily visual recording as reminders for himself; the first item on his list was to "hug Sally and remind her how dang special she is."[6] 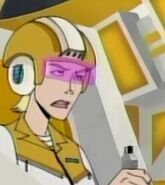