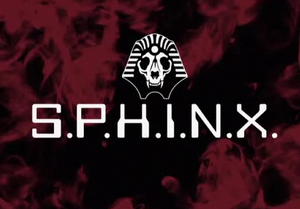 S.P.H.I.N.X. was a terrorist organization and enemy of the Office of Secret Intelligence until its defeat in the Pyramid Wars of 1987.

S.P.H.I.N.X. was later revived by disillusioned members of the O.S.I. and re-purposed it as an independent secret spy/peacekeeping organization to deal with rogue supervillains.

The Invisible Hand of Fate

S.P.H.I.N.X. was originally a terrorist organization that was the primary adversary of the Office of Secret Intelligence (O.S.I.) twenty years ago until its defeat in the Pyramid Wars of 1987. In Arrears in Science, its revealed the Movie Night Massacre on Gargantua 1, is what lead to the Pyramid Wars. Originally the O.S.I. were "told" that S.P.H.I.N.X took responsibility for what happened. However, Red Death reveals that to be false.

Red Death, himself, and a small group of villains had planned to hijack Gargantua 1. But the plan had gone south when someone opened the pod bay doors, killing many crew members, Jonas Venture Sr. and some of Red Death's group as well. Only Red Death, Vendata, and Hate-Bit had survived, instead of executing them, their Sovereign had other plans.

He impersonated S.P.H.I.N.X. Commander , using his identity to frame S.P. H.I.N.X. for the incident in front of the O.S.I. Red Death hints he did this to wipe out the Guild's competition.

Blood of the Father, Heart of Steel

A facility in The Venture Compound (formerly, now destroyed)

Several members of the O.S.I., who were disillusioned with its ineffectual bureaucracy, decided to take up the S.P.H.I.N.X. mantle along with their left over equipment to create an organization to deal with rogue supervillains (those who do not abide by the rules of organized villainy mandated by institutions like the Guild of Calamitous Intent). At some point they moved their base of operations into the manufacturing wing of the Venture Compound, somehow without alerting anyone to their presence.

After O.S.I. Commander, General Treister, quit and appointed Hunter Gathers as his replacement, the members of S.P.H.I.N.X. who were formerly O.S.I. agents are redrafted into O.S.I., leaving the former Henchman 21, Gary, as the only S.P.H.I.N.X. operative.

Gary operated alone for a short time, before he began a recruitment drive for some new members. However, Gary unwittingly recruit members from the original members of S.P.H.I.N.X., along with Hank Venture, in which the original S.P.H.I.N.X. Commander retakes control of his former organization. The original S.P.H.I.N.X. operatives then commit themselves to a final suicide attack on the O.S.I. Hover-Quarters because their loyalty chips implanted in their brains will soon dissolve and kill them. But the suicide attack failed when S.P.H.I.N.X. Commander ends up being killed by Brock Samson.

The O.S.I. then destroy the S.P.H.I.N.X. airship, while The Monarch blows up the warehouse that Gary was using as S.P.H.I.N.X. HQ, which leaves Gary as all that is left of S.P.H.I.N.X.

A large Sphinx, The Mighty Khafra, which was located inside the S.P.H.I.N.X. base at the Venture compound. When the Venture compound perimeter is intruded upon its eyes glow red and it announces such in a deep voice. It is later revealed to be a functional aircraft/mobile base which flies off to attack the O.S.I. Hover-Quarters after "old team Sphinx" takes it over from Gary/Henchman 21. Hunter Gathers describes it as "creepy". It was destroyed in SPHINX Rising.

They also have jet planes modeled after the Saab JA 37 Viggen.

Retrieved from "https://venturebrothers.fandom.com/wiki/S.P.H.I.N.X.?oldid=45633"
Community content is available under CC-BY-SA unless otherwise noted.