Roy Brisby is the creator of Bizzy Bee and the Brisbyland franchise on The Venture Bros.

Roy Brisby's use of a wheel chair, horrific appearance, and constantly clenched jaw are due to a stroke that he suffered while he was caught under a fallen animatronic Abraham Lincoln. Roy credits his longevity to panda milk, which, presumably, he obtains from his companda Li-Li.

He is protected by a gigantic, non-speaking bodyguard named Mandalay.

He was seen as a member of an Illuminati-type organization in the episode The Unicorn in Captivity. Although his face was never shown, his voice and silhouette were unmistakable, as was his bee-themed mask and riding about in an electric wheelchair. This was eventually revealed to be a virtual reality generated fantasy to keep Dr. Venture occupied. 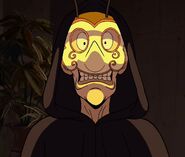 Bee incognito
Add a photo to this gallery
Retrieved from "https://venturebrothers.fandom.com/wiki/Roy_Brisby?oldid=47177"
Community content is available under CC-BY-SA unless otherwise noted.