Redusa is a minor character on The Venture Bros. She is a member of the Guild of Calamitous Intent and a take off on the mythological figure Medusa.

Redusa appears as an aging overweight woman with writhing blue snakes for hair.

Her eyes can project beams of energy that shrink their targets. Apparently if the effects are reflected on her, she can return whatever shrunken body part back to its normal size.

Redusa resides in Paterson, New Jersey. She was leased as arching rights to Dr. Venture, but was behind on her Guild payments.

In Maybe No Go, the Monarch and Henchman 21 coerce her into signing away her arching rights after a tussle that leaves her with a shrunken head. Afterwards, they give her a free monarch butterfly-themed pen for her cooperation.

In Faking Miracles, it is shown that she has turned her head back to its original size as she attends Wide Wale's party at Tophet Tower. At the party, Red Mantle spots and describes her to his other head, Dragoon, by saying that he and Redusa used to be in a relationship with each other. At Dragoon's urgings, Red Mantle talks with Redusa, leading to a sexual encounter in a tub. They are interrupted by Rocco, who knocks down the door while searching for Hank Venture. The surprise causes Dragoon to shriek and kiss her. Disgusted by Dragoon's action, Redusa shrinks his head and then breaks off the encounter by saying she doesn't do "threesomes" as Red Mantle tries to get her to come back by offering to put a bag over Dragoon. 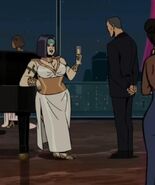 Add a photo to this gallery
Retrieved from "https://venturebrothers.fandom.com/wiki/Redusa?oldid=45571"
Community content is available under CC-BY-SA unless otherwise noted.