Red Death is the overarching antagonist of the 2003 Adult Swim animated TV series The Venture Bros.

Red Death is a veteran EMA Level 10 supervillain who only arches his nemesis one day a year. Despite his terrifying visage and reputation, he is actually a kind, gentle man who is a loving husband to a wife with a normal appearance and father to a daughter who looks like him.

In his earlier years he was a far different man, prone to totally submitting to his villainous identity. A flashback to 1987 in Arrears in Science shows Red Death as one of a group of young villains who belonged to The Guild in "the Dark Ages", when The Sovereign took the group underground: Stab Girl; Laugh Riot; Hate-Bit; Mr. Fahrenheit, the Super-Sonic Man; and Vendata. This group met weekly at a New York diner. One night they concocted an unsanctioned arch on Jonas Venture Sr., planning to infiltrate the crew of Gargantua 1 and hold everyone aboard captive. Vendata calculated the best time for the whole crew to be in one place at the same time: Movie Night. Red Death, Hate-Bit, and Vendata were the only survivors of the ensuing massacre, where everyone else perished.

Red Death first appeared in Tanks for Nuthin where a photograph of him is shown in Wide Wale's list of villains Fiends and Family Plan in line to arch Dr. Thaddeus "Rusty" Venture.

He makes his official appearance in Red Means Stop when The Monarch finds him in a park, where he is watching his daughter Lila play with the other children at a playground. The Monarch, thinking himself in disguise, approaches Red Death and the two have a conversation. As The Monarch prepares to kill him with a concealed gun, Red Death casually identifies The Monarch despite his disguise, telling him he knows The Monarch's reputation. Monarch is flattered that a legend like Red Death has heard of him, while the latter tells The Monarch about how he has managed to balanced his civilian and villain identity. He is able to scare the latter by speaking with his dark villain voice.

Later on, he is preparing to go off to arch Dr. Venture when his wife prepares brownies as snacks for him to take on his trip, which he gladly accepts. Red Death then sets off on his flying horse, evilly laughing as he travels through the streets of New York to VenTech Tower, scaring a majority of the people who spot him. He arrives at VenTech Tower where he engages Brock Samson and several disguised OSI agents (who were present to find the Blue Morpho). After some time passed, the OSI and the Guild inform Red Death of their plan in which he accepts their explanation and takes part in their pool party.

Red Death then receives a call from The Blue Morpho (using a disguised voice) where he is told that he had his wife and child. The Blue Morpho tells him to sign over his rights to arch Dr. Venture in exchange for them. Instead, enraged over this news, Red Death swears to hunt down and kill the Blue Morpho. This truly scares the latter, who immediately hangs up. Red Death leaves the party and soon arrives at the Morpho Cave where he forces The Blue Morpho and Kano (Henchman 21) out of hiding and begins to threaten them causing the Blue Morpho to truthfully admit to him that his wife and child are actually safe at his mother-in-law's home. They tell him to call to make sure which he does and confirms their safety. Now calm, Red Death speaks with The Blue Morpho, whom he recognizes as The Monarch. After being told their reasons, he tells Monarch and 21 of the story of his old archenemy and manages to get through to The Monarch over the effects of his recent activities and that he will get his chance to arch Dr. Venture if he lets other villains to do their job.

When 21 ask how is he is so calm about his killings of many people, Red Death asks how he is due to the news he heard about them to which 21 shows him and Monarch the bathroom of the cave holding many dead villains hostage and a crazed survivor. Red Death eagerly agrees to not tell anyone of The Monarch's activities provided they let him take care of the survivor, whom he presumably kills as the latter is heard screaming as Red Death laughs evilly.

Later at a Guild town-hall style meeting, the Guild Council offers a (meager) reward for the capture of Blue Morpho. Red Death states he will bring in Blue Morpho's head in return for a seat on the Council (due to the pension plan) and leaves. He later runs into Dr. Mrs. The Monarch, who enlists his help in saving The Monarch from Wide Wale in return for help getting onto the Council without killing her husband. They form a plan to break into Dummy Corp to find data on the location of Dr. Dugong, Wide Wale's brother who has gone into hiding under OSI protection. Red Death goes in ahead to incapacitates any OSI agents, though he ends up murdering them all in blood rage. In a comedic moment, he awkwardly downplays their deaths as mere incapacitation when Dr. Mrs. The Monarch asks when they will awaken. Red Death later flies into Tophet Tower with Dr. Dugong's chair chained behind his steed. As Dr. Dugong is proved not to be deceased and another distraction draws attention away, The Monarch escapes with his life. After the other villains gathered at VenTech Tower, Red Death identified to all that Blue Morpho was there and listened as the other council deduce his status as Vendata who is the original vigilante. At a diner, he reveals the truth of Movie Night and explains to Brock that S.P.H.I.N.X. was the scapegoat to cover the villains' tracks and the Pyramid Wars of 1987 wiped them out. He and Red Mantle laughed at Brock's horrified facial expression of paving the way for the rise of the GUILD.

Following the decision regarding the Peril Partnership, the Guild Council turns to the decision on what to do in the wake of their inability to fill the missing seats. Dr. Mrs. The Monarch invokes a clause in the Guild Charter that allows for a superannuated Council to rebirth itself as the governing body of the Guild. However, this would require every Council member to retire from active supervillainy and animosity toward personal arches. Before such retirement, every Council member is given a final arching assignment to their most significant archenemy, as determined by the Guild.

After departing from the Guild chambers, Red Death crumples up his final assignment letter without reading it. Instead, he confronts Blind Rage, who expects to hear the Guild will continue the payoffs and mocks Red Death for his age. Red Death fells him with a single punch and then ties him to a railway, like the gentleman villains of old. Red Death makes a terrifying, villainous speech as the lights of an oncoming train near. Red Death tells Blind Rage that, should he survive, he should inform the Partnership the Guild "isn't scared of punks". Red Death then rides off into the night laughing menacingly.

Red Death is among the Guild Council members conducting The Monarch's "Tenning" ceremony aboard Meteor Majeure in The Saphrax Protocol, having arrived there via the stolen teleporters.

In his civilian identity, Red Death has shown himself to be a kind and caring family man. His mannerisms and bearing are of a well-adjusted, loving, doting, nonthreatening suburban father. It is shown that he will go through great lengths to make sure they are safe, best seen when he threatened to find and kill The Monarch for laying a hand on his family.

When in his role as a villain, Red Death takes on a more dark and brutal personality which is able to intimidate those around him and leave them in a state of fear. He also possesses a strong compulsion to viciously kill when engaged in his role as he displayed extreme irritation at the thought of being unable to kill anyone while talking with The Monarch. He even agreed not to reveal The Monarch's activities to the Guild provided he be allowed to kill a crazed prisoner held captive by 21. When discussing the exchange, Red Death gingerly refers to his such an exchange as two parties helping each other out with their "problems". Red Death's "problem" resulted in the murder of his first archenemy, Professor Cadmium and his entire family. Possible further evidence of a dark instability may include the murder of Blind Rage behind the Council's backs. Red Death warns The Monarch not to become your "character"; he may be speaking about this from personal experience.

The speed at which he changes between these two roles is played for comedy. He will often swing sharply from friendly and jovial to intensely terrifying at a moments notice and back again, much to the horrified confusion of other characters.

Red Death is said by many villains from the Guild--as well as Hunter Gathers from the O.S.I.--to be a legend in the villain community. Even The Monarch considered it an honor for a villain like Red Death to know of his work.

He is very strong, as he survived an encounter with the skilled agent Brock Samson and killed many OSI agents at the Dummy Corp. He also took down a large man like Blind Rage with a single punch and tied him up easily.

Red Death speaking with The Monarch and Henchman 21. 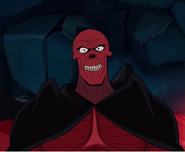 Red Death on his flying horse.

Red Death (in his civilian identity) watching his daughter. 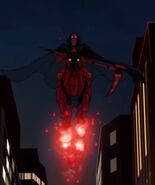 Red Death circa 1987
Add a photo to this gallery
Retrieved from "https://venturebrothers.fandom.com/wiki/Red_Death?oldid=49032"
Community content is available under CC-BY-SA unless otherwise noted.