Radical Left is a psychotic supervillain on The Venture Bros. who has half of his body severely disfigured. Originally imprisoned at Dunwitch Asylum, he is now a member of The Guild of Calamitous Intent's Council of 13.

Based on the DC Comics villain Two-Face, he appears to also suffer from a similar form of dissociative identity disorder. His personality is split between "radical" ideas, representing the disfigured left half (Radical Left), and more mundane peaceful desires of his unblemished right half (Right Wing). The name may also be a satirical reference to extreme anti-capitalist or egalitarian political ideologies.

It has never been stated what he did to be sent to Dunwitch, other than his dual personality. At some point prior to the events of Momma's Boys, he fell under Myra Brandish’s influence and got a tattoo to show his loyalty to her. Myra eventually staged a coup against the staff and security at Dunwich Asylum. After tricking Dean to visit, Myra hoped to then "rebirth" Dean. During this, she unintentionally reveals that she's actually not his mother. Hank and Henchman 21, who were also imprisoned there, overhear this as well. Hank then calls Myra out on her lie about being their mother. The other inmates hear this and then 21 also asserts that Myra isn't actually his mother either. This inspires Radical Left and the others by saying that he wants to be a Monarch again. There Radical Left admits he had ideas of being an anarchist but then his other half had second thoughts; later admitting he may want a home and family. 21 inspires them to break free against "Mother" and stages a coup against the "wall" she built. This causes him and the other inmates to start a rebellion and began to act wild. Though they never hurt Myra, they simply all break out of Dunwitch and leave.

In All This and Gargantua-2 it is revealed that Radical Left has joined Phantom Limb's Revenge Society, though it's never revealed how he came to join them. He was shown to be active when the Society attacked Gargantua-2. While Professor Impossible left the group, Radical Left is still with the Society when they escape Gargantua-2. Dr. Killinger hints that he wants the remaining members and Dr. Girlfriend to be part of a new Council of 13.

In Hostile Makeover, it is shown that Radical Left has become a member of the new The Council of 13 and along with the other six members are looking through of villains who could be a potential member.

In Faking Miracles, he and the other council members vote on re-instating Dr. Phineas Phage into The Council of 13 after the making the decision he personally thanks Wide Wale for having the meeting at his home. Later on, he is a guest of Wide Wale's party at Tophet Tower along with the other Council members.

In The Terminus Mandate, the Council of 13 reestablishes itself as the governing body of The Guild of Calamitous Intent in the wake of the inability to find enough members to fill its seats. This development requires all Council members to retire from active supervillainy to become Council members full time. Radical Left accepts this retirement. Like the other Council members, he is given one last arching assignment to his old archnemesis before retirement: Right Wing, who is his alternate and calmer persona. Right Wing accepts Radical Left's challenge, though he tells Radical Left not to absorb him again. The selected mode of contest is a game of Clue. After Radical Left is seen beating Right Wing in a game, Right Wing calls for the best of five. 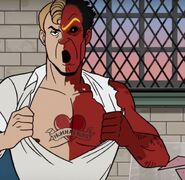 I'm Radical Left! I want Anarchy! ...And maybe a nice home and a family. 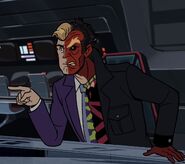 Councilman
Add a photo to this gallery
Retrieved from "https://venturebrothers.fandom.com/wiki/Radical_Left?oldid=48921"
Community content is available under CC-BY-SA unless otherwise noted.