Pete White (born January 19, 1962) is an albino computer technologist, and co-founder of "Conjectural Technologies" along with Billy Quizboy.

Pete White is a tall, thin handsome man with pale, pink skin, white hair concealing half of his face, white eyebrows, and dark red eyes. He most often wears a pink shirt with a white jacket overtop it, and pink pants. He is often seen wearing sunglasses and using a parasol to protect himself from the sun while outside.

During his time in college, White suffered from bad facial acne, and wore his hair longer. During his time as a quiz show host, White hid his albinoism through makeup and a black wig, making him appear tanned but otherwise the same.

Pete is intelligent but lazy and unambitious, self-absorbed but extremely loyal to his friends. Pete also has a tendency towards some mean spirited jokes as well as a passive aggressive nature. He is quite sarcastic and often snide, but this seems mostly due to his belief that he is a "freak", as he puts it, from being an albino. His lazy and sarcastic nature often leads to him being half-hearted in his work. This attitude sometimes puts him at odds with the more energetic Billy Quizboy. White is usually shown goofing off rather than doing actual work, such as playing video games or fooling around with scientific equipment.

On occasion, characters refer to him as "the gay albino", most likely because of demeanor and choice of clothing However, it is shown this annoys him, stating he is not gay, which is backed up by his recurring open interest in females. He has shown sexual interests in women such as Dr. Girlfriend, has fantasies about the mother from Growing Pains, and his encounter with Molotov's servants in the prom. Additionally, White states his seemingly effeminate fashion is not by choice, that his pink shirt is considered his "lucky shirt", and was red when he originally bought it.

Co-founder of Conjectural Technologies with Master Billy Quizboy, there are many words that could be used to describe Pete White... starting with "white". Pete is an albino who works and lives with his best friend, Billy Quizboy. Due to his condition, he must protect his pale skin from the sun with either a parasol or a hat (as seen in the episode Spanakopita!) and sunglasses.

His first known association with the Ventures came at State College which he attended with Dr. Venture, Baron Ünderbheit and The Monarch, and where he hosted a New Wave radio show called "The White Room". Pete's actual field of study is never referenced, nor is it mentioned if he graduated in the first place, though it is mentioned he flunked Professor Impossible's class.

After college, White and Billy Quizboy worked in tandem on a Jeopardy!-style gameshow, called "QuizBoys" in which Pete hosted and Billy participated, with Pete using makeup and a black wig to hide his albinism. There was a debacle concerning the show seeding Billy's answer display with the correct answer, regardless of what he put down. After being fired, White revealed to Billy that he is an albino and the two of them left to find new lives. They try to get a job working for Rusty Venture but they are rejected. White then tries to enter Quizboy into another competition, not realizing it is a dog-fighting ring, and Billy loses an eye and a hand. While the two had a short falling out, Pete eventually rejoined Billy (after his short unwanted stint with O.S.I. and his task of spying on Phantom Limb). They find refuge in a trailer near the Venture Compound, from which they operate out of. Despite this, the two are rarely seen doing any actual work.

Billy's skill as a surgeon attracted the attention of The Investors, who bought stock in Conjectural Technologies for $10,000,000. This money was payment for the future services of Billy as a surgeon, although Pete and Billy didn't know it at the time. They stood the risk of losing this money to the Monarch but by Guild law the Monarch was forced to give it back after Dr. Venture rescued Hank before the Monarch could "return" him.

He and Billy have worked their ways deeply into Doc and Dean's psyches, taking on the roles of Thanatos and Eros (respectively) in Doc's subconscious and The White One and Giant Boy Detective in Dean's fantasy. They frequently argue over whom is the protagonist and who is the sidekick, resulting in them both being kidnapped in Any Which Way But Zeus.

In the sixth season, after an encounter with their archenemy Augustus St. Cloud ends up costing them their company, Pete and Billy are soon told by the latter that he has sold their company to VenTech Tower. As a result, the two move to New York to become Thaddeus Venture's personal staff and chief inventors.

Billy Quizboy and Pete White met approx. 19 years ago. Pete White was the host of a game show called "Quizboys" on which Billy was a contestant. However, there was a scandal in which Billy would get the correct answer no matter what he wrote down, causing all of Billy's winnings to be frozen by the FCC. As White by then was pennyless too (as a result of spending all his earnings on cocaine), he and Billy set out on a moped, competing in underground quizbowls in hopes of making their way to the Venture Compound where White assumed Dr. Venture would give them jobs. When they eventually make it there they are turned down, so they go back on the road. Pete accidentally enters Billy in a dog fight one night, which causes him to lose his eye and hand. After an encounter with the O.S.I. Billy's mind is eventually wiped and Brock brings him to White.

The two formerly resided in a trailer not far from the Venture Compound and co-owned "Conjectural Technologies" before Augustus St. Cloud forced them to sell it to him, then sold the business to Dr. Venture. Pete mainly seems to stick with Billy out of guilt, as he was basically the reason Billy's life went downhill. After Season 7, they are living in New York with members of Team Venture and Billy's mother at Colonel Gentleman's apartment on Christopher Street.

Billy and Pete's friendship is strong, though simultaniously shaky. Billy is often frustrated by Pete's bad habits, nonchalant attitude and general lazyness, with Pete rarely taking his passive aggressive notions seriously. Despite how close the two seem, Pete openly declares that he considers Dr. Venture to be his actual best friend, with other characters frequently calling him out on it. Despite these difficulties, the two are both inseperable and highly dependent on one another, with both having put themselves in great danger to save the other.

Dr. Venture and Pete White first met in college in the early eighties. In The Silent Partners he even states that Rusty is his best friend, for mainly this reason. However, Dr. Venture doesn't seem to value their friendship as much, mostly using White and Billy for favors, and wouldn't even give them jobs in The Invisible Hand of Fate.

Though Thaddeus will not admit, Pete is one of the real few friends that he actually has. The two are often showing enjoying each other's company, such as playing games, having discussions or playing pranks on others (frequently Billy).

In Maybe No Go, he and Billy move to new York after their company was taken over by Augustus St. Cloud for one penny which he in turn sold to Ven-Tech Industries for a considerable profit. Pete is now part of Dr. Venture's personal staff and works as one his chief inventors. 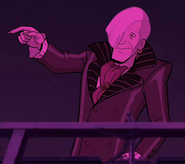 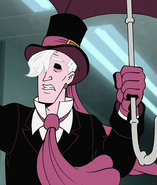 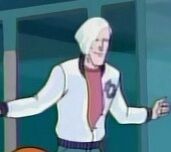 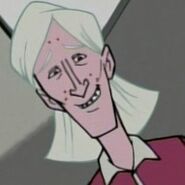 Pete White in the pilot. 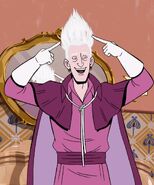 pete white holding an axe
Add a photo to this gallery
Retrieved from "https://venturebrothers.fandom.com/wiki/Pete_White?oldid=48880"
Community content is available under CC-BY-SA unless otherwise noted.