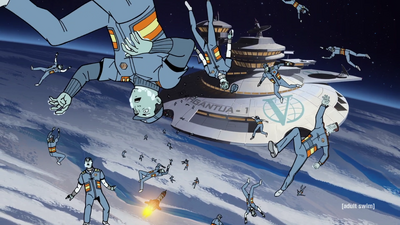 Movie Night is a disaster and massacre that occurred on Gargantua-1 on April 9, 1987 on The Venture Bros.

First cryptically spoken of in ghost-story fashion in the second episode of Season 1, Careers in Science, the disaster was revealed to be true in the first three episodes of Season 7.[1][2][3] The disaster (seemingly) claimed the life of Jonas Venture Sr. among many others aboard the space station, and the fallout that followed ultimately caused the Pyramid Wars of 1987.[3]

A crew of six up-and-coming supervillains (Red Death, Stab Girl, Hate-Bit, Mr. Farenheit, Laugh Riot, and Vendata) hatched a Guild-unsanctioned plot to hijack the Gargantua-1. Although the general idea of getting Jonas Venture Sr. aboard Gargantua-1 was suggested by Laugh Riot as an off-the-cuff joke, Vendata ran with it and used his mastery of tactical cunning to calculate when all the crew would be in one spot: Movie Night. The crew infiltrated the space station disguised as crew members for a strike against Jonas Venture Sr.[2][3]

After the infiltrators were aboard, Vendata (then amnesiac of his previous lives as The Blue Morpho and Venturion) personally confronted Jonas with the intent of coercing Jonas' cooperation through blackmail, threatening to show the tape of Jonas' and Blue Morpho's extramarital affair with Jill St. John and Stella Stevens. Jonas laughed at this threat, stating that Vendata was The Blue Morpho and would do the right thing. He offered to help Vendata, but Vendata refused, further threatening to open the cargo bay doors. Jonas instead turned his back and walked out on him, smug in his confidence that his old friend would never betray him.

What happened afterwards resulted in everyone, including the infiltrators, being jettisoned out into space after the pod bay doors were opened. Only Red Death, Hate-Bit, and Vendata survived the ordeal. Though Vendata/Blue Morpho was implied to be the perpetrator, years later he would deny it by stating that he has no memory of doing it, suggesting the possibility of an unknown third party.

Late to the party, the original Team Venture discovered the horror of the massacre. They retrieved Jonas' body from space to deliver it to the PROgressive Biological Life Extension Module (PROBLEM). On the way, they slipped on Rusty's toy cowboy and Jonas' frozen body shattered into pieces, only allowing for Jonas' head to be saved in the PROBLEM.

The massacre was considered a failure for The Guild as the conspirators were taken just as off guard as the rest of the station's crew. The Sovereign would likely have had the infiltrators executed for the unsanctioned strike, but instead he took advantage of it. Assuming the form of S.P.H.I.N.X. Commander, The Sovereign gloated to OSI about the death of Jonas Venture Sr., thereby pinning his murder on S.P.H.I.N.X. and causing the Pyramid Wars of 1987. The wars ended with the destruction of S.P.H.I.N.X., formerly the largest competitor to The Guild of Calamitous Intent in organized villainy.

The massacre was condensed into a ghost story told by Bud Manstrong (one of the few known survivors of the incident) to the Venture Family, who had come to fix Gargantua-1 after the PROBLEM light activated. According to Manstrong, when he was but a paperboy aboard the Gargantua-1 a disgruntled and unhinged member of the crew gathered almost everybody onboard the station to watch Sharky's Machine for Movie Night. However, this maniac then opened the pod bay doors, sucking everyone gathered into the vacuum of space. The disaster killed most of the crew. Manstrong concluded the tale by stating that some say the ghost of the deranged killer, the "Phantom Spaceman", may haunt the halls of the space station to this day.[4]

The still-living head of Jonas Venture, ensconced in the PROBLEM, tried to communicate by performing Morse code through the red light on the device's casing, but nobody recognized the attempt at communication, thinking it to be the mere blinking of a problem indicator light.[3] Jonas then turned his attention to communicating directly with Gargantua-1's computer systems, which ultimately caused a system failure that sent Gargantua-1 crashing to Earth. After the remains of Gargantua-1 were found in a desert, Jonas Venture Jr. retrieved the PROBLEM from the crash site and had it placed in VenTech Tower in New York City.[1]

It was not until two years after the destruction of Gargantua-1 that partial truths of the massacre emerged when the PROBLEM re-activated. Red Death confesses to several of his fellow villains about his presence at the massacre. Brock Samson and by extension the OSI learned about their deception in the Pyramid Wars. Vendata/Blue Morpho confronted Jonas and remembered the events of the massacre, but denied causing it, finally leading to his and Jonas' apparent deaths when the latter attempted to take possession of Vendata/Blue Morpho's body.[3]

Retrieved from "https://venturebrothers.fandom.com/wiki/Movie_Night?oldid=48531"
Community content is available under CC-BY-SA unless otherwise noted.