View source
watch 01:32
Wiki Targeted (Entertainment)
Do you like this video?
Play Sound

Molotov Cocktease is an assassin and love interest, friend, and occasional rival of Brock Samson on The Venture Bros. She previously lead the all-female mercenary group The Black Hearts. After they were eliminated, she began working as a mercenary for the Office of Secret Intelligence.

She and Brock have known each other for approximately twenty years, when both were young and capable but inexperienced field agents. They clearly possess very strong feelings of attraction towards each other, yet have shared little more than passionate kisses and embraces with each other. Two reasons for this are their often-contradictory goals and Molotov's titanium-reinforced chastity belt (which inspires considerable yet understandable frustration in Brock). While this device has not been explained on the show, the Adult Swim website states that she wears it in keeping with her father's dying wish; ironically, Brock himself killed Molotov's father, thus making him indirectly responsible for his own sexual frustration.

While Brock and "Mol" (as he affectionately calls her) obviously share a good deal of history, little of it has been shown. They first met in Paris while on an undisclosed assignment, Brock working for the Office of Secret Intelligence and Molotov for the KGB (seen in flashback during the episode Assassinanny 911). Like many of their subsequent meetings, the encounter resembled sadomasochistic foreplay: she ultimately left him pinned to a mattress in a burning apartment, and in parting threw a lit cigarette onto his chest as he begged for one to smoke. Other events of their turbulent acquaintance, described but not depicted, include the death of Brock's partner at Molotov's hands, Brock subsequently killing Molotov's father, and Brock removing her left eye. (Although the time frame for these happenings is unclear, Brock has kept the eyeball as a souvenir of sorts; it floats in a jar on his nightstand, still brilliant green. Molotov seems to consider this "sentimentality" endearing.) One meeting between the two was described as a laser show in an Akron, Ohio planetarium to the music of Led Zeppelin; it was never specified whether the encounter was romantic, professional or accidental. Brock, a Zeppelin fan, has mentioned that one of their albums brings back strong memories of her, and this may be a reference to that meeting.

Ultimately, however, she showed herself to be more than willing to manipulate Brock, and put his life in danger to further herself. She and Col. Hunter Gathers made it seem like 3 top OSI-linked assassins were out to kill Brock, with them helping Brock with information on how to get the assassins. In truth, Molotov hired the assassins specifically for Brock to eliminate them, making her "Black Hearts Elimination Agency" (of which Hunter Gathers is a member) the top assassins in the world. The incident also led to Brock resigning from both the OSI and as Dr Venture's bodyguard.

The sometimes seemingly murderous back-and-forth between Brock Samson and herself might very well be yet another of the numerous nods this animated series gives to comics and specific comic book characters. In Marvel Comics, a divorced, but friendly pair of world-class assassins -the heroic Silver Sable and the supervillain The Foreigner -also routinely clash in a professional but 'friendly' manner, and they too also occasionally (seemingly) try to kill one another.

A possible early rendition of Molotov Cocktease can be seen near the end of the Season 1 opening credits after Baron Werner Ünderbheit and before a man in scuba gear. A female character is shown with red hair, a beauty mark, and a unitard lighting a cigarette off of a Molotov cocktail. This design was later used for the flashback sequences of her in Assassinanny 911.

Cocktease first officially appeared in the first-season episode The Incredible Mr. Brisby. Brock had been felled by a drugged cigarette and dumped in a tar pit to die, but he awoke to find Molotov pulling him free with a winch. (Reminiscent of a scene in Frank Miller's Sin City book, The Big Fat Kill.) After alternately viciously battling him and passionately making out with him, she agreed to help Brock rescue the Ventures. True to her word, she led him to the headquarters of the Orange County Liberation Front, but they arrived too late to intercept the boys. They both traveled to Brisbyland, where once inside the Brisbydome she took her leave to pursue her own objective: recovering Roy Brisby's pet panda for its previous owner, David Bowie.

She appeared again in Eeney, Meeney, Miney... Magic!, although only as a fantasy. Brock became trapped inside one of Dr. Venture's inventions, a device dubbed "The Joy Can" that allowed people to live out their innermost dreams. In Brock's hallucination, she informed him that she was finally ready to go "all the way", but only under one condition: that he would not be gentle.

In the second season, her relationship with Samson seems to have cooled down somewhat. In Assassinanny 911, Brock asks her to temporarily assume his duties as Venture family bodyguard while he tackles a separate assignment. While the pair do not flirt much, Cocktease obviously respects Samson immensely and is disgusted with what she considers his babysitting duty. She decides to subject the Ventures to intense training, hoping to eliminate their utter dependence on Brock.

Hank becomes smitten with Molotov (as does his father Dr. Venture to a lesser degree). After accidentally injuring himself with her hidden boot spike, Hank hallucinates that she wants him to kill Dr. Venture; he responds by attacking his father with a papier-mâché machete. As Hank spits out lines from the Doors' song, "The End", the scene ends up as a tip of the hat to the film "Apocalypse Now".

When Brock returns, he continues to decline Molotov's offers to become a mercenary team together, and she leaves in disappointment.

In the fourth season finale, Operation: P.R.O.M. Molotov reveals to Brock that she has fallen in love with Monstroso, even going so far as to remove her chastity belt. Both Molotov and Monstroso are in a limo as it plunges off a cliff.

In What Color is Your Cleansuit?, Brock investigates the wreckage of the limo which (unsurprisingly) reveals that Molotov escaped and 'Monstroso' was actually a blow-up doll.

In O.S.I. Love You, the O.S.I. track down the yacht that Monstroso and Molotov were located on, easily apprehending them. After a escape attempt by Molotov aboard the O.S.I. Hover-Quarters, Brock captures Molotov. While in the process of throwing Molotov to her demise, Colonel Gathers appears and reveals that it was a test. Molotov is a double-agent and was in fact working for the O.S.I. all along, assigned to killing the double-agents within the O.S.I, which Brock finds unbelievable.

Molotov is a Russian mercenary who performs black ops-type activities for anyone who can afford her services. On the surface, she appears to be the Soviet, female equivalent of Brock Samson: an amazingly competent, utterly lethal cigarette smoker who is irresistible to the opposite sex and unbelievably hard to kill. However, she seems to lack Brock's sense of long-term loyalty and duty, often acting in either her own best interests or that of her client of the moment. She also differs from Brock in that she does not share his dislike for firearms.

Cocktease's outfit consists of a very revealing, skin-tight black unitard (which barely covers her large breasts, dips below her navel in front and reveals the tops of her buttocks in back), topped with red gloves and stiletto heel boots and a heart-shaped eyepatch over her left eye. A holster is slung low across her hips and a scabbard strapped to her back holds a katana-like sword. Her hair is long and red, her remaining eye is green, she has a small beautiful mole/beauty mark above her lip on the right side (resembling that of Marilyn Monroe), and she is in overall magnificent physical condition. Molotov is quite aware of her beauty and its effect on men, and does not hesitate to use it to her advantage.

While she speaks near-perfect English, she retains a thick Russian accent. As is appropriate to her chosen vocation, she is proficient in a wide variety of weapons (including knives, swords, and guns) as well as unarmed combat and martial arts. Her boots conceal dagger-like (and apparently poison or drug-tipped) spikes that protrude from the heels, although how she extends or retracts them is unclear. 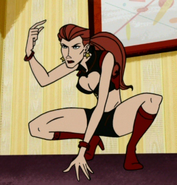 Molotov when she was younger.