Martin is one-off character and brief antagonist in the Venture Bros. episode What Color is Your Cleansuit?. He is a friend of Thalia and student who goes to State University.

In What Color is Your Cleansuit, he joins the Palaemon Project along with Thalia to work as a student intern. They are both assigned to research and development. As a consequence of working on the project in a heavily irradiated environment of the E-Den, both Thalia and Martin became mutations with radically altered bodies and telepathic abilities. He also happened to go "mad", as Thalia described it to Dean Venture.

As a new society of mutant nerds matured over the next three months, their society quickly grew its own "sy-fy original movie" type mythology and religion, including an apocalyptic transformation of the world's people into fellow mutants. Martin planned to use the Gargantua-2 Ray Shield to elicit this mutation. However, Thalia persuaded Dean to challenge Martin for power as Lee-Hun-Took through a series of unorthodox challenges. Dean won, becoming the prophetic savior and winning the affections of Thalia.

Dean's revelry was short-lived, thanks to a combination of Dr. Mrs. The Monarch's genetically engineered anti-mutant monarch butterflies dropped in from the Cocoon and a foul gas concoction of "antibiotics and roofies" filtered through the air ducts by Doctor Thaddeus Venture. All of the mutant interns were returned to normal, and everyone inside fell into a drug high that made them forget everything about what happened. Both Thalia and Martin were returned to normal with only hazy dreams of what had happened. 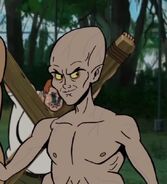 Martin as a mutant
Add a photo to this gallery
Retrieved from "https://venturebrothers.fandom.com/wiki/Martin?oldid=40177"
Community content is available under CC-BY-SA unless otherwise noted.