Edit
watch 01:23
Wiki Targeted (Entertainment)
Do you like this video?
Play Sound

Man-Dune was a villainous mental patient on The Venture Bros.

Man-Dune was one of the patients held at Dunwitch Asylum. Like many inside, he fell under Myra Brandish's sway as one of her Momma's Boys.[1]

He was among the rioters who joined the escape attempt following Myra Brandish's failed coup. When Hank, Dean, and Henchman 21 leave Dunwitch he can be seen fighting in the background. 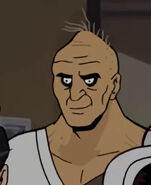