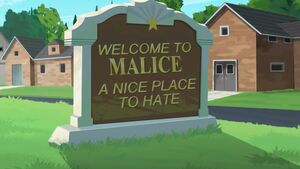 Malice is a gated community for supervillains. A number of important villains reside or have resided here, such as Phantom Limb, The Monarch, and Sgt. Hatred.

Several of the low-level jobs in Malice are performed by robots. For example, robots act both as paperboys[1] and security guards. They are modeled to look and act like humans, but they have gaps in their programming. Sgt. Hatred demonstrated that although a security robot is programmed to answer 700 different questions, a disjointed conversation about chicken fingers can short them out.[2]

Malice's location has never been explicitly stated, but in one episode the Hollywood skyline can be seen, creating the implication that Malice lies near Beverly Hills.[2]

The "Lair of The Phantom"[edit | edit source]

Phantom Limb's home in Malice, which he grandiosely describes as the "Lair of the Phantom!" is based on Frank Lloyd Wright's Storer House.

After Phantom Limb's defeat at Cremation Creek and the Guild of Calamitous Intent's ceremonial induction of The Monarch and Dr. Mrs. The Monarch as a duo, the Council of 13 task the newlyweds with seizing the Lair to use as their new home. They successfully take over the Lair of The Phantom in the Season 3 opener Shadowman 9: In the Cradle of Destiny and live there for three seasons, finally moving out after Sergeant Hatred inadvertently burns down both the house and the Cocoon in the Season 5 finale The Devil's Grip.

Retrieved from "https://venturebrothers.fandom.com/wiki/Malice?oldid=45499"
Community content is available under CC-BY-SA unless otherwise noted.