The luchador first appeared in the pre-themesong intro to Dia de Los Dangerous!

He was one of the Mexican Wrestlers that worked for the unnamed Mexican Gangster. After Brock Samson lost a game of strip poker and started a brawl, the Mexican wrestlers all attacked him but were thoroughly defeated. Impressed and infatuated with Samson, a luchador in a red costume asked Brock to take him with him. Brock refused, but gave the dejected Luchador his shirt, to which the luchador enjoyed a deep sniff of.

Later, the luchador is seen as a party guest at The Venture Compound in A Very Venture Christmas, where he is still carrying around Brock's shirt. Later in the episode, he speaks with Colonel Gentleman in the background shortly before Krampus crashes the party. When it busts through, Gentleman jumps into the luchador's embrace. That he appears in this episode is interesting, as it it revealed to be Dr. Venture's dream. Dr. Venture was never seen at the Mexican gangster's shop, leaving one to guess how Dr. Venture learned of the luchador in red.

In Shadowman 9: In the Cradle of Destiny the luchador in red shows up a third time to help rebuild the Cocoon after the Monarch and Dr. Mrs. The Monarch are approved for villainous duoship by The Guild of Calamitous Intent.

He was among the Guild members who attended the meeting at Don Hell's nightclub following the death of The Sovereign and the loss of most of the Council of 13. 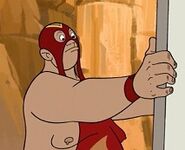 Helping rebuild the Cocoon
Add a photo to this gallery
Retrieved from "https://venturebrothers.fandom.com/wiki/Luchador_in_Red?oldid=47839"
Community content is available under CC-BY-SA unless otherwise noted.