Le Tueur (born 1968, falsified as 1985) is a one-time appearing character and minor antagonist from the The Venture Bros. television show. In universe, he is known as a top assassin among O.S.I. He was the first of three sent to kill Brock Samson.

Originally from Neuilly-sur-Seine, France, Le Tueur is a jaded big game hunter turned hunter of people. In addition, he is an enthusiastic fan of Silver Age comic books and Batman. However, the latter is mostly because Batman has the greatest villains.

Le Tueur's pride is such that he refuses any code names.

Le Tueur is the third of three assassins (the other two being Herr Trigger and Go-Fish) allegedly called in by the O.S.I. to kill Brock Samson as a result of his mandated termination in episode ORB. He catches up with Brock and the Venture Family at a motel.

While Brock is out running errands, Doctor Thaddeus Venture is in the bathtub, and Dean Venture watches television, Hank Venture stands outside their room watching over the courtyard banister. He unknowingly encounters Le Tueur smoking and wearing a Batman bathrobe. A conversation begins, and they bond over a mutual love of comic books. Brock returns and enters the courtyard, warning Hank of Le Tueur. Le Tueur runs to his room and quickly changes as Brock runs up the stairs to Hank. Brock asks Hank if is alright, and Hank answers that he and Le Tueur had planned to go to Comic Con together.

Le Tueur comes out of his room and tosses a boomerang, striking Brock in the head. Hank is hit by the ricochet off Brock. Le Tueur follows up with a dive off of the banister onto a diving board below and then launching himself into Brock Samson. The two fly through a motel window.

As he chokes the seemingly helpless Brock on the bed, Le Tueur scolds Brock about shaving his hair. Flailing around for something to smack Le Tueur with, Brock cloud bubbles Sky Pilot telling him his earlier advice. From the nearby nightstand drawer, Brock removes a Bible and smites Le Tueur in the head with it. From the bathroom, Dr. Venture thinks the noise of the scuffle is from the T.V. and yells at his sons to keep the volume down.

Back in the bedroom, Le Tueur slams Le Tueur's head into the television.Standing over Brock, Le Tueur admits his admiration for Brock and his past work before drawing a katana. Le Tueur rattles off a history of the sword, but Brock merely mocks him and sarcastically wonders why swordsmen always talk about their weapons so much. Le Tueur pulls back his arm to ready a killing blow but accidentally jabs the sword's handle into Hank as the latter enters. Le Tueur apologizes to Hank, and Brock slugs Le Tueur while he's distracted. Le Tueur retaliates with a series of sword slashes bringing Brock to the side of the bed. Le Tueur slices off one of Brock's nipples. Enraged, Brock grabs Le Tueur with his legs and throws him across the room. Le Teuer drops his sword in consequence.

Switching to the bathroom, Dr. Venture yells at the boys once again and tells Dean to check the minibar. Meanwhile in the bedroom, Le Tueur has smashed Brock's head with said minibar, bringing Brock to the ground. Le Tueur gloats that he will kill Brock, only to be admonished by Hank as to how Batman would never kill anyone. Le Teuer smiles and draws a knife, admitting he only liked Batman only because of his villains. While Le Tueur is distracted, Brock retrieves the katana from the ground. Le Tueur turns as he leaps at Brock, but Brock holds the sword in the way of Le Tueur's leap. Le Tueur is cleaved in half, and blood squires across the room.

Brock drags Le Tuere's body towards the bathroom and tells Dean to look up the number for the Cleaner. Brock displaces an initially grumpy then horrified and nauseous Dr. Venture before placing the body in the tub. However, Brock and the Ventures are discovered by two detectives and taken into custody. They are interrogated for murder but ultimately exonerated by the Cleaner's removal of said murdered person before the Cleaner rescues them.

Agent Doe and Agent Cardholder relate the deaths of Herr Trigger and the other assassins with General Treister. The OSI goes after Brock Samson. However at the end of the episode, once the OSI catches up with Brock, Treister reveals they're not there to kill Samson but rather to protect him. After the credits, Molotov Cocktease celebrates the death of the three assassins with her Black Hearts, revealing the whole matter as part of a scheme to eliminate the competition. 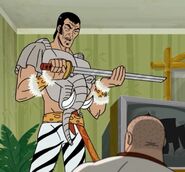 Le Tueur in combat gear
Add a photo to this gallery
Retrieved from "https://venturebrothers.fandom.com/wiki/Le_Tueur?oldid=36856"
Community content is available under CC-BY-SA unless otherwise noted.