Karl is a one-time character and antagonist on The Venture Bros. He is a mutant cheetah-man and a member of U.R.G.H. Karl at least nominally serves under Venturestein, though he seems to hold some notions of usurping Venturestein's power.

Having seen and experienced only the bad side of scientists, Karl has an intense hatred for all of them good or bad seen when he requested Venturestein kill Dr. Venture. He is described by Venturestein to be a "hot head" due to his ill temper.

Despite this, Karl is very loyal to his comrades as he wanted Dr. Venture dead to their roles in killing one of his comrades.

Because of Venturestein's leniency, Karl made plans to usurp his authority which is seen rallied all the abominations against Venturestein. Ironically, when the other abominations followed Karl they were nearly killed by H.E.L.P.eR. who appeared to save Dr. Venture.

Karl appears to understand technology, as he recognized the jPad and knew that if it got wet then its warranty was voided.

According to Venturestein's description, Karl was created in a lab by "bad scientists" and subjected to torturous experiments, which shapes his perception of scientists to this day. Like many lab-created creatures human society calls "abominations", Karl was rescued by U.R.G.H. and taken into the fold of their revolutionary army.

He first appears in Venture Libre where after the Venture Family crash-lands in Puerto Bahia, Karl leads a small party of soldiers to capture Sgt. Hatred and Dr. Thaddeus "Rusty" Venture. (Hank Venture escapes their notice, having used a jet pack to escape the crashing X-1.) Following the capture, Karl angrily demands that Venturestein allow them to kill the outsiders because Dr. Venture is a scientist and to avenge the death of Turu, the pteranodon that had brought down the X-1. Venturestein persuades Karl to go outside and calm down, though Karl pees in the corner on his way out. Venturestein notes to Venture Karl's tempestuous past.

Later, Karl leads an angry mob of protesters formed in front of Venturestein's pyramid demanding justice for Turu by wanting the deaths of Hatred and Dr. Venture. Karl posits that he should become leader, though his suggestion is cut off by worried discussion of "The Bat". (This is actually Hank, who has undergone a caffeine-induced psychological transformation into a guise resembling the character he admires so much.) Karl forms a hunting party from his fellow angry protestors and leads them into the jungle on Hank's trail.

In the jungle, Karl discovers Hank's campsite and thereby his true nature. Despite Karl's assertion that The Bat is simply "a boy with a tummy ache", Hank momentarily strings up Karl from a tree, takes down the rest of his followers, and escapes capture. Moreover, Hank frees Hatred and Dr. Venture from their cell. After Karl discovers them at the cells, he calls his hunting party again and gives chase. On the way, Karl discovers the nonfunctional jPad, having seemingly been rendered useless by Hank discarding it in the swamp.

Karl and his followers catch up to the Ventures on the beaches of Puerto Bahia, where Karl mocks Hank for leaving the jPad in the water since it voids the warranty. As they advanced on the Ventures, they are interrupted by the arrival of H.E.L.P.eR., whom is heavily armed and loaded for bear after Dr. Venture orders the robot to kill all of the abominations. However, he is interrupted by the arrival of boats filled with abomination immigrants, an overjoyed Venturestein tells the time he promised has come. A helicopter carrying congresswoman Marsha Backwood, whom quickly takes charge of the situation. Marsha takes note of the fallen jPad and asks if anybody drops it. It explodes in her hands, to the abominations' horror. Dr. Venture notes he "can fix this", ending the episode as the end credits roll.

In the post-credit epilogue, it is revealed that Marsha has been reborn into one of the -steins and represents the Abomin-Nation at the U.N. Dr. Venture and company are shown to be okay, having perhaps escaped doom by significantly helping the cause of U.R.G.H.

The exact outcome of Karl's aspirations, to overthrow Venturestein, if he ever decided to re-enact them, are not specified but it is likely he gave up since Venturestein brought more people to their community. 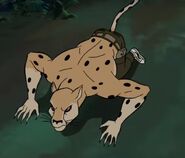 Karl takes to running on all fours to chase down Sgt. Hatred.

Karl leads Boar-Man and Dog-Man in hunting down Dr. Thaddeus "Rusty" Venture and Sergeant Hatred.
Add a photo to this gallery
Retrieved from "https://venturebrothers.fandom.com/wiki/Karl?oldid=46917"
Community content is available under CC-BY-SA unless otherwise noted.