Kano was the former bodyguard of Jonas Venture Sr. and member of Team Venture on The Venture Bros.

Before joining Team Venture, Kano was the crime-fighting partner of The Blue Morpho, and the two had saved the lives of Team Venture when they were captured by the villain Scaramantula.

According to the Jonas Venture comic series, Kano joined Team Venture when the Blue Morpho was possessed by an alien virus that made him evil. However, Colonel Gentleman brought the validity of the comics into question and The Blue Morpho later revealed that Jonas Venture Sr. had blackmailed him into giving up Kano as a bodyguard/partner.

Kano became an OSI agent assigned as Jonas Venture Sr.'s bodyguard, but in reality meant to protect the Orb. He remained throughout the years as Dr. Venture's aide until Venture's apparent death during Movie Night. Thereafter, Kano retired and took a vow of silence, choosing to communicate only by way of origami and sparse gestures due to having taken "a great man from the world." It was later revealed he was referring to the Original Blue Morpho/Venturion, as he killed him only to save Rusty.

When Jonas's son, Rusty, was searching for the Orb, Brock Samson went to Kano for information. Kano gave the second gramophone of Eugen Sandow (as Kano kept it because it also contains Sandow's chocolate recipes) to Brock. When Brock questioned Kano if he killed the elder Venture, Kano remained silent. It is later revealed that he actually killed Venturion, formerly the Blue Morpho, when the cyborg went berserk and tried to strangle Rusty Venture. Kano also dropped Jonas's body, shattering it, so that only Jonas's head would be put in the PROBLEM machine after slipping on one of Rusty's plastic cowboy toys.

The moniker of Kano, as he worked for the Blue Morpho, was adopted by Gary Fischer in order to help the new Blue Morpho take down Dr. Venture's slew of new arch-villains. 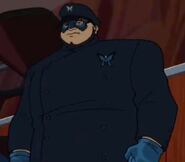 Working for the Blue Morpho

Kano fighting Brock Samson.
Add a photo to this gallery
Retrieved from "https://venturebrothers.fandom.com/wiki/Kano?oldid=48180"
Community content is available under CC-BY-SA unless otherwise noted.