Jorge is a twice-appearing minor character from the Venture Bros.. He was indirectly responsible for inspiring Venturestein in creating U.R.G.H..

In ¡Viva los Muertos!, Venturestein was presented with a pro-forced/child labor propaganda film Learning With Everyday Joe: Alternative Labor Forces while in the learning bed. This film featured Jorge as a young boy enjoying forced child labor at a shoe factory.

In Venture Libre, Venturestein along with several other reanimated undead had been sold to the United States army, and they were sent out to Central America with orders to destroy the revolutionaries there. It was here Venturestein spotted and recognized a now-adult Jorge, who he was inspired to save from the mission. Jorge was very scared to be hugged by an undead abomination but soon got over it as he was able to speak with him. Through his talks with Jorge, Venturestein was taught about the exploitation of the proletariat, all of which motivated Venturestein to quit the army to go out into the jungle with the remaining abominations. Through his journey in the jungles of Central America, Venturestein saved many tortured abominations and founded his own "abomi-nation", U.R.G.H.. 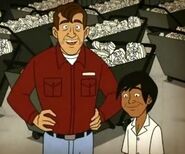 Everday Joe and Little Jorge from the video
Add a photo to this gallery
Retrieved from "https://venturebrothers.fandom.com/wiki/Jorge?oldid=48054"
Community content is available under CC-BY-SA unless otherwise noted.