Joey Nickels was a villainous mental patient on The Venture Bros.

Joey Nickels was one of the patients held at Dunwitch Asylum. He was among the rioters who joined the escape attempt following Myra Brandish's failed coup with her Momma's Boys cult.[1] 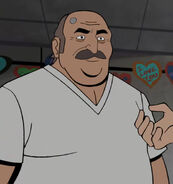 Retrieved from "https://venturebrothers.fandom.com/wiki/Joey_Nickels?oldid=43712"
Community content is available under CC-BY-SA unless otherwise noted.