watch 02:03
Wiki Targeted (Entertainment)
Do you like this video?
Play Sound

Jefferson Twilight is a minor recurring character on The Venture Bros. He is a "blacula" hunter, and a member of The Order of the Triad alongside Dr. Orpheus and The Alchemist.

At times, he has expressed bitterness over the fact that he apparently doesn't have any magical powers (indicating that his Blood Eye might have non-magical origins) and is "just" a blacula hunter; however it is revealed in The Better Man that he has the power to act as a bridge between worlds. Upon finding out about his new ability, Jefferson becomes very excited and attempts to see if there are any other abilities he possesses.

At the age of ten, Jefferson witnessed his mother being raped by "blaculas" (black vampires), which no doubt inspired him to take up his occupation. He has become a very proficient swordsman which helps him slay many enemies while he travels across the world. It is also mentioned that he was formerly a tank commander in the Marines, as he is shown to be able to operate heavy vehicles. It is unknown where or how he acquired his "Blood Eye" (his left eye, which is red), which helps him track blaculas.

He joined the Order of Triad though has at times expressed resentment that he lacks any type of power like his friend. However, it is shown in The Better Man that Jefferson actually has the power to act as a bridge between worlds. Upon finding out about his new ability, Jefferson becomes very excited and is able to bring his friends back from the Netherrealm.

During A Very Venture Halloween, Jefferson attends the Halloween party hosted by Orpheus enjoys the others in raising zombies. However the zombies were destroyed in the group or confronted by The Master (in the form of Santa) who Jefferson and Al were pleased to finally meet. 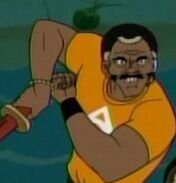 Add a photo to this gallery
Retrieved from "https://venturebrothers.fandom.com/wiki/Jefferson_Twilight?oldid=49068"
Community content is available under CC-BY-SA unless otherwise noted.