View source
watch 02:07
Spider-Man: No Way Home Trailer Dropped - The Loop
Do you like this video?
Play Sound

Henchman 24 was a henchman for The Monarch on The Venture Bros. and a close companion with Henchman 21 until his death.

24 is shown to be very cowardly, as he is shown to rather give up entirely without putting much of a fight, when being put into a fight, as well as fearing confrontation most of the time when Brock Samson shows up, saying "Oh crap" every time he sees him.

Sometime after the plant he worked at closed down 24 turned to professional henching for recourse since his only qualification was a GED.[1] 24's ex-girlfriend broke up with him at an unknown point and married his dad. 24 henched for Phantom Limb as Shadowman 24 for a period of time. He first met The Monarch here, who was moonlighting as both the supervillain and Shadowman 9 at the time. At one of Phantom Limb's parties The Monarch convinced 24 to dress up as Shadowman 9 and serve to guests so he might seduce Queen Etheria as The Monarch. 24 agreed so long as he could become Henchman 1 when The Monarch arched full time. When he tried to join The Monarch, Queen Etheria mistook him for Shadowman 9 ("the one with all the staring") and 24 was turned down.[2]

24 later joined up with The Monarch anyway. He was a part of the crew tasked to kidnap Ben Nighthorse Campbell, a Senator from Colorado, but accidentally kidnapped Gary because he looked more senatorial and was holding the US flag. He and Gary eventually became close friends.

Henchman 24 was a part of Speedy's reconnaissance crew to keep track of the Ventures in Mexico. He helped kidnap Hank and Dean and incapacitate Brock Samson. After Brock Samson seized Speedy by the neck 24 ordered the other Monarch henchmen to kill Samson in an ultimately futile attempt to save Speedy. He was one of the many henchmen hit by Brock's car when they assaulted the cocoon to rescue the boys. He survives the attempt.

In Tag Sale - You're It!, Henchman 24 is seen paired with Henchman 21 as a comedic duo for the first time. They accompanied the Monarch and Dr. Girlfriend to Dr. Venture's yard sale, though their arguments in the backseat on the way enraged the Monarch to the point he threatened to turn the car around if they didn't stop. Later, they confronted Sampson, and Henchman 21 attacked him with a light-saber light device bought from Dr. Venture. Unfortunately, the device had no effect, and the henchman pair were scared away by a mere "boo".

In Home Insecurity, Henchman 24 participated in a plan to assassinate Venture on the Venture Compound with several other members of the Fluttering Horde, only to run into the minions of Baron Werner Ünderbheit. After an argument over whom got the arch, both sides called in to their respective bases for a resolution to the conflict. While waiting to hear back, the henchmen became bored and eventually got to drinking and talking with each other. Eventually 24 called to trash the place. However, after H.E.L.P.eR.. reset the security, they drew attention from G.U.A.R.D.O., whom soundly thrashed all the henchmen, leaving bodies and burning rubble in its wake. Somehow, Henchman 21 and 24 survived, a trend that would continue for some time.

in the Trial of the Monarch, the Monarch was sent to prison for a murder that never occurred as a cover for other Guild business. In the postcredit scenes, 24 is seen dressed up as Dr. Girlfriend so that the Monarch could pretend to accept her apology. 24 reacted quite awkwardly.

Later from prison, the Monarch gave 21 and 24 a list of orders over the phone, including giving the burnt corpse of Wonderboy to Captain Sunshine, destroying the Cocoon, and killing Hank Venture and Dean Venture. Later 21 and 24 encountered the Venture boys on the road and accidentally discharge an explosive gun weapon, killing the Venture brothers.[3]

Henchman 21 and 24 followed through on the orders to blow up the Cocoon and then went their separate ways. During the Monarch's time in prison, 21 encountered 24 in civilian guise at a henchman recovery support group. The meeting was at first quite friendly but quickly became awkward when memories of the past were brought up.[4]

Following the Monarch's escape, he called Henchman 21 and 24, his last remaining henchmen, to refurbish the Cocoon and gather new henchmen, a task that they surprisingly fulfill. 21 and 24 recruit a group of thugs off of the street, whom eventually rebel against the Monarch and imprison 21, 24, and the Monarch in the holding cells. The three escaped along with Dr. Venture by going through the air ducts to 21's room, where they gathered a number of toys to use as improvised weapons. The four come running out with figurative guns blazing, only to collide with Brock Sampson and Phantom Limb, whom have already slain the thugs.[5]

During the time of Dr. Girlfriend's absence, 24 and 21 experimented with efforts at being their own villains, mostly at 21's instigation. However, these were ended early on due to mishandling of jetpacks 24 stole from Sergeant Hatred.[6]

Eventually Dr. Girlfriend reunited with the Monarch, she agreed to the Monarch's wedding proposal on the terms of his abandonment of the Venture grudge. Unfortunately, 24, 21, and a group of henchman somehow managed to capture Samson and the Ventures. In order to cover up the capture, the Monarch put them on the wedding guest list and made Dr. Venture his best man. 21 and 24 attended the wedding as musicians, with 21 playing the guitar and 24 playing guitar. However, Phantom Limb and a group of rogue Guild Wasps attacked the wedding[7], forcing the Fluttering Horde into battle. Brock Samson took temporary control of the Fluttering Horde and led them into battle against Limb's forces. It is unknown to what degree 21 and 24 contributed to the ensuing Battle of Cremation Creek, but 24 did take the lead of a squad of henchmen. Ultimately, the Fluttering Horde prevailed, though at the loss of many men and the destruction of the Cocoon.[8]

With the marriage of the Monarch and the new Dr. Mrs. The Monarch, the latter's former henchmen Kevin and Tim-Tom, the Murderous Moppets, joined the Flutter Horde. Overseeing the reconstruction of the Cocoon, the vile-behaving Moppets soon began bullying and terrorizing the other henchmen. They held a particular hatred for 21 and 24, perhaps because they showed the most resistance. At one pointed they badly injured 24 with knife wounds, sending him to the medical bay.[9] This was but a preview of things to come.

The Moppets were allowed to stay inside of the Monarch couple's home in Malice as opposed to remaining in the less comfortable Cocoon floating nearby. In addition, the Moppets began being taken on jobs instead of the Monarch's crew, making them jealous. This was not always the case, for 21 and 24 were sent on a covert mission with Henchman 1 to deliver a patch on Jonas Venture Junior's security system that would allow the Monarch to hack his surveillance cameras. (When Dr. Mrs. The Monarch asked her husband why he was sending 21 and 24, the Monarch only commented they fit the right mix of survival factor and disposability. During the mission, 21 and 24 constantly mocked Henchman 1 for his lack of savvy and impending doom while at the same time letting the ever professional 1 do all of the work. The pair escaped the wrath of Sampson by hiding among the museum displays as still figures, leaving Henchman 1 to die at the hands of Brock Sampson. When 21 and 24 returned without knowledge of what they were supposed to do, the Monarch said he hated that they were his most valuable henchmen.[10]

Other than their fear of the Moppets, a smug sense of lazy invincibility and sense of self-perceived genre savvy set into 21 and 24. This lazy smugness would lead to 24's undoing. When the Fluttering Horde and the OSI did battle at the Venture Compound, the pair ducked out and hid in the backseats of the Monarch Mobile, determined to wait it out. In a surprise twist H.E.L.P.eR. escaped his confinement and sat into the driver's seat. 21 quickly jumped out but 24 had buckled his seat belt, trapping himself inside the car. As the car drove off, 21 asked him why he had buckled up. The Moppets detonated a bomb hidden inside H.E.L.P.eR., killing 24 instantly. His flaming head hit the screaming 21[11]

24's death profoundly impacted 21. Determined to change, 21 went on a lengthy training regimen and even took the X-1 on sabbatical for a time. Though he came back stronger and more skilled, 21's sanity began to erode. He held onto 24's skull and believed he spoke to 24's ghost. 21 kept a list of possible suspects for 24's death that he investigated, even going so far as to kidnap Hank Venture and Dean Venture for "Chinese water torture", though his attempts at interrogation failed due to not enough hatred.

For 24's part as a "ghost", he haunted 21 and hounded him to find the killer. Although 24 would many times seem to talk with him as before, mentioning the afterlife and even bringing guests like Speedy, 24's presence eventually caused 21 to seek a way to rid himself of the apparition, as there was not even a moment 21 could be left alone to even masturbate. Whether 24 truly existed as a ghost or was a mere delusion is a matter of debate, as there is evidence on both sides. On the one hand, one of Monstroso's henchman, a former Monarch underling, recognized him and talked with him. On the other hand, at one time he brought along the ghost of an actor 21 thought was dead but was not actually the case. Dr. Orpheus seemed unable to perceive 24, thus seemingly proving to 21 that 24 existed in his mind only. Once 24's existence was thus disproved to 21, the "ghost" was no longer there.[12]

Shortly after 24 stopped appearing to him, 21 buried 24's skull on the grounds of the Venture Compound. From then on, 24 is largely absent from the show, although he appears for a one-liner disembodied voice in Rapacity in Blue and in 21's nightmare in The Rorqual Affair.

21 and 24 have been best friends since the start of the series. They often argued about trivial things, like whether or not Smurfs are mammals. In the episode The Family That Slays, Stays Together Part II 24 dies in an explosion. 21 begins carrying his skull around and talking to it. It is revealed in Pinstripes & Poltergeists that 24 is actually a ghost who haunts 21, and is, at least partially, responsible for turning 21 into the leader of the henchmen. In Operation P.R.O.M. 21 doubts 24's existence and it is hinted that he may not actually be a ghost, and is afterwards confirmed by Dr. Orpheus, when even he cannot see 24. However there is some evidence that he still could be. 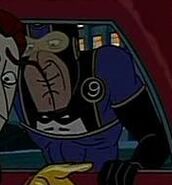 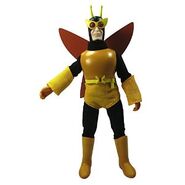 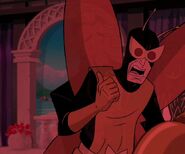