Hate-Bit is a minor recurring character on the Venture Bros. He is a supervillain who is a member of the Guild of Calamitous Intent.

He is the various villains to appear in backgrounds and minor cameo roles in various episodes of the Venture Bros.

Little about his background, not even his official name, was given until the Season 7 episode Arrears in Science, where he was shown to be one of the conspirators to engage in the Guild-unsanctioned infiltration and attempted hijacking of Gargantua 1 (which turned into the Movie Night massacre.)

His inhuman physiology allowed him to escape death when Vendata (apparently) opened the cargo bay doors, but Hate-Bit along with the rest of the conspirators would likely have faced execution had the Sovereign not decided to take advantage of the situation to instigate the Pyramid Wars of 1987.

He was among the Guild members who attended the meeting at Don Hell's nightclub following the death of The Sovereign and the loss of most of the Council of 13. 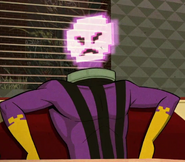 Hate-Bit in the 80s
Add a photo to this gallery
Retrieved from "https://venturebrothers.fandom.com/wiki/Hate-Bit?oldid=48855"
Community content is available under CC-BY-SA unless otherwise noted.