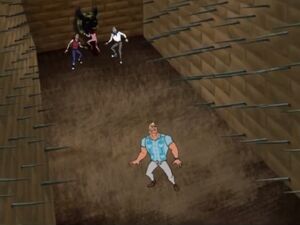 The Hall of Sorrows was a trapped dungeon the Ibis Priest and the Cult of Osiris threw the Venture Family and Brock Samson into during the Venture Bros episode Escape to the House of Mummies Part II. It featured the usual moving spiked wall, and boiling oil was supposed to come out the open mouth of a jackal head statuette attached to the wall. The former was thwarted by Dr. Orpheus, leaving the Hall heavily damaged. The latter was thwarted by henchperson incompetence, a henchperson mishearing the Ibis Priest's orders on what to fill the jackal with. The henchman thought his master said voile rather than oil.

Retrieved from "https://venturebrothers.fandom.com/wiki/Hall_of_Sorrows?oldid=37485"
Community content is available under CC-BY-SA unless otherwise noted.