watch 02:03
Wiki Targeted (Entertainment)
Do you like this video?
Play Sound

Eugen Sandow was a German bodybuilder and bodyguard of original Guild founder Colonel Lloyd Venture. He was covertly assigned by the precursor to the Office of Secret Intelligence with ensuring that Venture did not activate the mysterious device known as the Orb.

Employed by the predecessor of the OSI, Sandow was assigned to kill Colonel Lloyd Venture to prevent him from successfully unlocking the Orb. Though he had grown wary of Venture's research into the Orb, Sandow disobeyed his orders and refused to carry out the execution.

During an attack on The Guild by Nikola Tesla, Venture was close to unlocking the Orb. Sandow begged him not to, but to no avail. Rather than following his orders, Sandow chose to crush the Orb, rendering it useless. Venture was upset until Sandow explained that his orders were to kill him, after which Venture thanked him. Thereafter Sandow and Venture decided to hide the Orb's broken state from their descendants and later bodyguards by repairing the outer casing.

Sandow recorded his story about the Orb (along with a listing of chocolate recipes) on two gramophone cylinders which were later left to his successors, Kano and Brock Samson. The latter would almost follow Sandow's situation, coming close to killing his charge Rusty Venture, but gratefully stopped when the younger Venture decided not to activate the Orb. 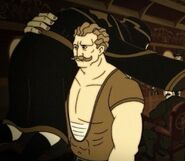 At the request of Fantômas, Sandow throws Aleister Crowley out of the blimp after he tries to claim the Orb for himself.

Sandow begs Colonel Venture not to use the Orb.
Add a photo to this gallery
Retrieved from "https://venturebrothers.fandom.com/wiki/Eugen_Sandow?oldid=44927"
Community content is available under CC-BY-SA unless otherwise noted.