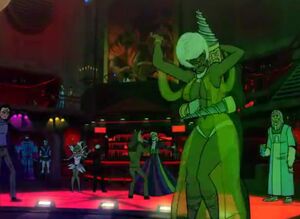 Don Hell's is a fictional nightclub for villains existing the universe of The Venture Bros. television show. Named for its former owner Don Hell, it was converted into a guildhall for The Guild of Calamitous Intent following his demise.

Don Hell's is a graffiti covered concrete bunker that rests upon a barren stretch of land whose precise location has not been specified. When in operation, Bruno the bouncer watched over a roped-off area and demanded the Guild of Calamitous Intent ID cards for all whom entered. If the need for violence came up, he was armed with a pistol.

From the exterior, there was little clue to indicate the wild partying that went on down below. looking in from the outside, the structure seems empty. This is because one must ride an elevator down to get to the real club proper.

The interior of Don Hell's was a much more festive place with a bit of a retro feel. Disco balls lit up the room with various alternating lights, and there was a dance floor of significant size. Hellstesses comprised the primary waiting staff, and they also distributed Torture Tickets (see "Wheel of Torture" below. The nightclub also has its own D.J. and theater. 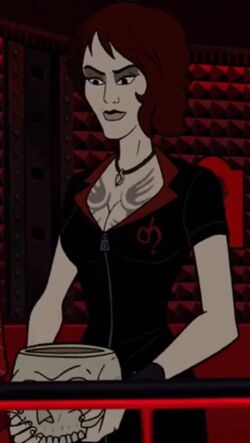 One of the nightclub's forms of entertainment was the Wheel of Torture, somewhat like a dark version of the Wheel of Fortune. When they had a captive, Don Hell spun the Wheel while the Hellstesses distributed "Torture Tickets" (though they are plastic chips), randomly picked from skull-shaped jars. Whichever villains received the Ticket matching the form of tortures the spinner landed on were granted the pleasure of committing said torture.

At 19:26 of Bot Seeks Bot, the tortures can be all read on the Wheel of Torture. They are as follows:

Don Hell's nightclub is featured as the setting for much of the Bot Seeks Bot episode. Following the funeral of Boggles the Clue Clown and his replacement by Phage on The Council of 13, A number of Council members went to Don Hell's to celebrate a new member joining the Council.

The OSI hoped to gain information on the Council of 13 by tricking it out of Vendata. To do so, they sent in an civilian informant, Ghost Robot, to meet Vendata at Chairman Wao's Chow House under the pretext of a date. It did not go well at the Chow House because none of them could eat normal food. Therefore, Vendata and Ghost Robot transferred the date to Don Hell's.

After OSI lost contact with Ghost Robot, Brock Samson and Shore Leave went to Brock's old garage to pick up some villain’s costumes. However, they inadvertently revealed the existence of what Dr. Venture thought was a costume party. Seemingly snubbed, Dr. Venture trailed them before going to Conjectural Technologies and picking up Billy Whalen.

Inside the nightclub, Ghost Robot's date with Vendata was not going well. Vendata stepped away from Ghost Robot to greet his other Council members. Soon thereafter, Brock Samson and Shore Leave (disguised as "Yeti Mummy" and "the Red-Throated Loon", respectively) entered to collect Ghost Robot and abort the mission. Samson approached Ghost Robot to tell him the mission was no-good. Don Hell spotted "Galacticon" and pointed his apparent shift of romantic attention out to Vendata. Outside, Bruno caught Dr. Venture and Billy Whalen snooping around but pretended to fall for their disguise as Dr. Ventriloquist and his dummy, letting them in.

The entrance of the real Galacticon introduced a complication to extracting Ghost Robot. Shore Leave attempted interference while Ghost Robot and Brock Samson rushed into the bathroom to disguise Ghost Robot in the Yeti Mummy costume. Outside, Bruno told Don Hell of Dr. Venture's intrusion, and Don Hell excused himself from the conversation with Vendata to prepare for the night's entertainment.

Vendata, thinking his date had been stolen, followed Samson and Ghost Robot into the bathroom. After Vendata caught Ghost Robot and Brock Samson seemingly having sex in a bathroom stall, Samson kicked the stall door open and sent it smashing into Vendata. The blow caused Vendata to short out and shut down. With Vendata out of commission, Brock Samson stole his uniform. Outside of the bathroom, Flying Squid accosted Shore Leave for stealing the costume of Sri Lankan Devil Bird. However, Brock/"Vendata" interference caused Flying Squid to back down. 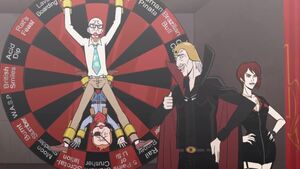 The night's Wheel of Torture, with Dr. Venture and Billy Whalen tied on it, interrupts Brock Samson and co. from their exit. The Hellstesses passed out the Torture Tickets as Shore Leave began laser cutting a disco ball to drop upon the villains. with Franklin Delano Disco receiving the ticket for Dr. Venture's fate: an acid dip. Brock quickly stepped in and snatched the chip from Franklin, claiming the "honor". However, the night's entertainment is ruined by the arrival of The Monarch and Dr. Mrs. The Monarch. Tipped off by Flying Squid, they cite Guild rules to deny other villains from arching his primary enemy. Samson's intervention seemingly render moot, he went to leave with Shore Leave and Ghost Robot. On the way out, Vendata briefly accosted Samson before shorting out again.

After Dr. Venture was set free and the Monarch was left to confront him, the disco ball loosened from before dislodged and fell, crushing Venture. The Monarch took him back to the Cocoon in the following episode, The Devil's Grip.

All This and Gargantua-2[edit | edit source]

Don Hell's is briefly featured in this episode, where Don Hell is poisoned in his own nightclub. He drinks what turns out to be a glass of acid that eats him away from the inside. His murder is only one of several of the Council of 13, perpetrated by The Sovereign. Later in the episode, The Sovereign blew up the Guild of Calamitous Intent's headquarters to conceal his escape from the OSI in hawk form, but he was taken out by an accident misfire from Headshot. 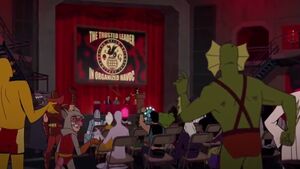 In this first episode of Season 6, Don Hell's is shown to be closed and now serves as a gathering place for the Guild's villains. Dr. Mrs. The Monarch and several other survivors of the old Council of 13 addressed the disquiet among the Guild's rank and file, revealing the death of The Sovereign and their plans for the future.

Retrieved from "https://venturebrothers.fandom.com/wiki/Don_Hell%27s?oldid=48369"
Community content is available under CC-BY-SA unless otherwise noted.