View source
watch 01:36
We're Getting Mutants in the MCU - The Loop
Do you like this video?
Play Sound

Dermott Fictel has been a supporting character on The Venture Bros. since Season 3. Over two seasons, he became Hank Venture's best friend. For a while, he believed Brock Samson to be his father, but later learned he is Dr. Venture's illegitimate son.

Dermott is the son of Thaddeus Venture and Nikki Fictel. He was conceived when Rusty had sex with 15 year old Nikki, believing her to be 20. Nikki's mother blackmailed Rusty by threatening to reveal the incident to the tabloids. Rusty paid them off and never saw Dermott as a baby.

Dermott was raised to believe that his grandmother was his real mother so that Nikki, who he believes is his sister, wouldn't have the burden of caring for him when she was a teenager.

Dermott meets his father as a teenager when his grandmother (still pretending to be his mother) tells him that his father is at the Rusty Venture day camp. Dermott believes that his father is Brock Samson, not Thaddeus. Dermott befriends his half-brother, Hank Venture, while still completely unaware of their relationship.

Dermott creates a band, Shallow Gravy, along with Hank and H.E.L.P.eR.. Dermott hangs out with Hank and becomes an employee of Hank Co.. While "working", Dermott asks Hank to find out where his mother is when she's late to pick him up, leading to a series of visions that identify Rusty as Dermott's biological father. Dermott and Hank book their band a gig at Hank and Dean's home school prom, where they play their song "Jacket".

Throughout their encounters in the Compound, Thaddeus begins to treat Dermott the same way he does Hank and Dean, now aware of the fact that he is Dermott's biological father. Dermott's visits and associations with the family have allowed him to now understand H.E.L.P.eR., something that confuses him.

Dermott realizes that Thaddeus is his father after Dr. Orpheus answers a mental plea for help and informs him he expected the call to be from Hank or Dean, since the mental signature was that of one of the Venture brothers.

The next time Dermott returns to the Venture Compound, he leaves for work but not before saying "Oh, later Dad!" in front of Hank and Dean, surprising Rusty and the twins.

In All This and Gargantua-2, Dermott is at work and while throwing out trash he finds the corpse of The Nerve and is horrified by it. He soon attends the funeral of his uncle Dr. Jonas Venture, Jr.

In season 7, he has joined the ranks of the OSI (Private Second Class), thanks to his father putting in a good word on his behalf provided he didn't admit they were related. It is currently unknown if Dermott will discover his relation to the Monarch.

Dermott Fictel is a stereotypical punk and poser. He's confrontational, resentful of authority, and "macho". He often brags about and/or exaggerates his accomplishments, such as his hands being registered as lethal weapons or teaching a Ninjitsu class (he actually wears the padded clothing for a rape prevention class). He projects the image of being a "ladies man", even though his only known interaction with a girl was with Triana, where he just made lewd comments and insulted her.

His penchant for hiding things in his rectum and his clingy inclination towards Hank (as well as his general lack of understanding of women) has led many fans to speculate that he may be a closeted homosexual.

Dermott has an imaginary girlfriend whom he describes as a model who lives "upstate".

Having been around the Ventures, Dermott showed he has picked up some of their traits as he was able to understand H.E.L.P.eR., which surprised both him and Hank. When he finds out he is really Dr. Venture's son, he is accepting to it as he calls the latter his father while leaving him and his brothers in shock.

Dermott does not know until Season 5 Episode 6, "Momma's Boys", that Dr. Venture is his real father. Thaddeus expresses mild disdain for Dermott, viewing him as a hooligan but not entirely disapproving of his relationship with Hank. Dermott tends to react with indifference when interacting with Rusty. Dr. Venture is not initially aware of his relation to Dermott, originally thinking he is Brock's son. Rusty eventually deduces his true parentage during an interview in the Jacket special by recognizing Dermott's last name and estimating his age whereupon he quickly ends the interview.

For most of season 5, whenever Dermott is at the Venture Compound, Thaddeus treats him exactly how he treats his other sons Hank and Dean though without revealing the details of their relationship. A notable example is in the Halloween Special, whereupon Thaddeus is seen trying to discipline him at the beginning of the episode stating "I have my reasons" when Dr. Orpheus notes on how he's hard on him.

In "Momma's Boys", Dermott is confused as to why Thaddeus has been giving him chores in his recent visits. Later on, he learns who his real father is from Dr. Orpheus and while that was happening Thaddeus (in a death bed confession contest) confirms his knowledge by telling Sergeant Hatred "Hank's friend Dermott-- that's my illegitimate son". Dermott didn't seem to mind it as it made sense to him. At the end of the episode, Dermott shocks Thaddeus, Hank and Dean by calling Dr. Venture "dad". Maybe the open admission of their father-son status will essentially change their relationship. In Season 6, Thaddeus has moved to New York while Dermott wasn't seen.

In The Inamorata Consequence, it is revealed that Thaddeus put in a recommendation for Dermott to join the OSI on the condition that Dermott would not divulge that they were related showing his willingness to aid his son in his goals.

Hank and Dermott became best friends on their first meeting. They share many interests, including rock music and formed a band, "Shallow Gravy" with Dermott on vocals, Hank on guitar/bass, and H.E.L.P.eR being used for percussion. Dermott occasionally becomes frustrated by Hank's naiveté. He tends to stick very close to Hank's side and even sneaks into his bedroom un-announced. Neither of them were aware that they're half-brothers (Hank was once, but had his memory erased). Hank was shocked to hear Dermott call Dr. Venture "Dad", so their future relationship is unclear.

In The Inamorata Consequence, Dermott greets Hank and reveals "his father" put in a recommendation for Dermott to join the OSI. Hank seems unaware that Dermott is referring to their shared father, Dr. Venture, and asks if his father had pull with the OSI because he was "in black ops".

Dean and Dermott share a contentious relationship from early on, which culminates in Dean attacking Dermott after he insults Triana. Since then they've settled into a quiet dislike for one another. Dermott even attempted to help Dean win back Triana's favor after an embarrassing fight at the Venture homeschool P.R.O.M.  Like Hank, neither were aware they are really half brothers. When Dermott learned, he seemed accepting of it though Dean was shocked to hear Dermott call Thaddeus "Dad", so maybe their relationship will change.

As seen in The Saphrax Protocol, Dean is one of the few people who knows the truth about Dermott's parentage, since his father told him in a drunk moment.

Dermott made a very bad first impression on Brock: the latter was teaching children some martial arts moves, while Dermott attempted to show off that he's better at everything than him, which really annoyed Brock to the point of wanting to beat him up. However, Brock restrained himself enough to not to, even though he could have easily done that, instead hoping someone whom he trains will beat him up. Later on, Dermott - without Brock asking - was eventually beaten up by Dean after he trash-talked to Triana, which greatly pleased Brock who stopped Dr. Venture from interfering as they were kids. Unbeknownst to Dermott, Dean wasn't even really trained in any way.

Dermott for a while believed he was Brock's son, unaware that he's actually the son of Thaddeus Venture. Brock is one of the few who knows the truth about Dermott's parentage since he hasn't had his memory erased. 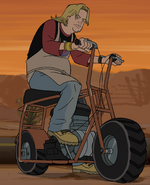 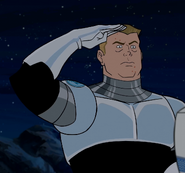