The Venture Family use communicator watches to keep in touch with each other. Each member has one: Rusty, Brock, Hank, Dean, and later Sgt. Hatred.

In All This and Gargantua-2, Billy mentions to Rusty that Hank gave him one of the watches as well which he had been told was a gift from Rusty but Rusty points out he had no idea, implying it was just an old watch he no longer needed.

In The Diving Bell Vs. The Butter-Glider, Brock finds out Hatred has his old communicator watch after he had shipped it back to Rusty from Argentina via a Mailboxes, Etc.

Hatred: I'm tired of you always "brock-blocking" me, Samson! I'm head of security! I'm the new sheriff of Venture Town! I wear the watch now! 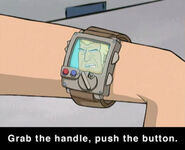 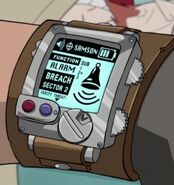 Add a photo to this gallery
Retrieved from "https://venturebrothers.fandom.com/wiki/Communicator_Watch?oldid=47043"
Community content is available under CC-BY-SA unless otherwise noted.