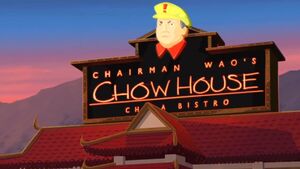 Chairman Wao's Chow House is a fictional Chinese restaurant on The Venture Bros. It bears the likeness and name of the supervillain Chairman Wao and is presumably owned by him.

The restaurant was first shown in the episode Bot Seeks Bot, where, as part of an OSI sting operation, Ghost Robot met Vendata on a date. He was to trick Vendata into revealing more information about the Council of 13. However, the date did not go well as neither of them were able to consume the food served at the restaurant. Ghost Robot and Vendata decided to go to Don Hell's nightclub instead, interrupting the sting operation.

Chairman Wao's Chow House also appeared in All This and Gargantua-2, where Steppenwolf and Councilman 10 were killed when a bomb inside Steppenwolf's car exploded shortly after they exited the restaurant. The bomb was almost certainly planted by the Sovereign or one of his minions.

Retrieved from "https://venturebrothers.fandom.com/wiki/Chairman_Wao%27s_Chow_House?oldid=44104"
Community content is available under CC-BY-SA unless otherwise noted.