Captain Sunshine is a solar-powered superhero with the ability to fly and produce powerful bursts of solar light that can blind and sunburn opponents. His secret identity is Chuck Scarsdale, a wealthy television news anchor on the Channel 5 Action News Team.

Chuck was the first Wonder Boy in the 1960s under Desmond, who was the original Captain Sunshine. The duo fought Red Mantle and other villains during their partnership, but it ended when Desmond retired and passed the title of Captain Sunshine to Chuck.

Captain Sunshine was the archnemesis of The Monarch, who tricked him into believing The Monarch was invincible, which Sunshine still believes to this day.[1]

His sidekick, Wonder Boy III, was killed by a drunk and heartbroken Monarch following a breakup with Dr. Girlfriend. During his time in prison, The Monarch ordered Henchman 21 and Henchman 24 to send Wonder Boy's charred remains to his mentor.[2]

The death of the recent Wonder Boy deeply affected Captain Sunshine, prompting him to have his revenge on The Monarch. However, he only took him to prison, from which the Monarch was promptly released due to Sunshine literally just throwing The Monarch into the prison, which violated his right to due process. Sunshine also rescued Hank Venture from The Monarch's clutches, temporarily making Hank the next Wonder Boy.[3]

When The Monarch led an assault on Sunshine's home while he was absent in his civilian job, Sunshine quickly returned out of concern for losing Hank, hijacking Action 5's news helicopter in the process. Afterward he was confronted by The Monarch, who was inadvertently dressed in a Wonder Boy costume. This triggered Sunshine to become psychologically unhinged, which the Monarch exploited. Furthermore, The Monarch, aware that Sunshine had no powers at night, attempted to burn Captain Sunshine with his own power using a ray gun (made by his wife) that would mimic Sunshine's solar burst. However, he inadvertently charged up Sunshine's body, giving him the power to defeat The Monarch and his henchmen. After dealing with The Monarch, Sunshine was forced to say goodbye to Hank when Rusty Venture showed up to save his son.

In Any Which Way But Zeus, his butler Desmond was kidnapped by Henchman Zero. Captain Sunshine later showed up to save the wounded Desmond, who fought back against Henchman Zero.

Chuck was later seen attending the Boggles The Clue Clown's funeral alongside his unnamed fifth Wonder Boy.[4] While somewhat emotional over his archenemy's death, he believed the Clue Clown had one last trick up his sleeve as he always had the last laugh. It was proven true when the Clue Clown's last message was read by Monseñor, which held one last riddle about a Jack-in-the-Box. Just then the coffin sprung open with the Clue Clown hanging from a spring coming out of the coffin, which proved Captain Sunshine's suspicions of him wanting the last laugh. When the coffin was finally closed, Captain Sunshine had an emotional breakdown and cried over the coffin before it was buried. 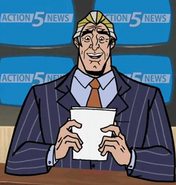 Retrieved from "https://venturebrothers.fandom.com/wiki/Captain_Sunshine_(Chuck_Scarsdale)?oldid=48227"
Community content is available under CC-BY-SA unless otherwise noted.