Blind Rage is a (thus far) one time appearing character on The Venture Bros. He was a villain and a member of the Peril Partnership sent to negotiate with the Guild of Calamitous Intent.

Blind Rage met Dr. Mrs. The Monarch and Red Death at Vincenzo's to discuss missing kickbacks Wide Wale had previously been offering to the Peril Partnership to stay out of Guild territory. Spitting food out of his mouth as he talked, Blind Rage demanded the Guild continue paying the kickbacks in order for the Peril Partnership to stay out of town and feign fear of the waning Guild. Dr. Mrs. The Monarch only said she would relay Blind Rage's message to the Council. As he left the restaurant, he complimented Phantom Limb (poorly disguised as a chef) on the stuffed peppers.

At the meeting of the Council of 13, a vote decided they would pay off the Partnership. Red Death offered to make the drop as it was on his way home. However, Red Death confronted Blind Rage instead. Blind Rage mocked Red Death's age, but it only took a single punch from Red Death to knock Blind Rage unconscious.

Blind Rage eventually awoke to find himself gagged and tied to railway tracks. Red Death made a villainous speech, and told Blind Rage if he survives to let the Peril Partnership know that the Guild holds no fear of them. Red Death gloated that the train was coming and Blind Rage was in a predicament in hoping whether it’s on the other track or if he can escape somehow. Taking his leave, Red Death told him if he survived tell his allies the GUILD was not afraid before issuing a sarcastic apology if not.

The train went over the railway, though it is not shown whether Blind Rage was definitively run over or somehow escaped. 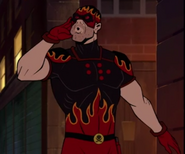 Red Death Tormenting Blind Rage
Add a photo to this gallery
Retrieved from "https://venturebrothers.fandom.com/wiki/Blind_Rage?oldid=49006"
Community content is available under CC-BY-SA unless otherwise noted.