Battleaxe is an axe wielding supervillain and wife of Haranguetan on The Venture Bros. She also manages a pub called Ye Old Battleaxe.

She first appears in Tanks for Nuthin', where she is seen working at her bar when Dr. Mrs. The Monarch visits her. At first, she assumes that she is there to collect money due to her being from the Guild and informs her they already paid her, only to be told that wasn't the case as it was news concerning her husband. Battleaxe introduces herself while stating she nothing to do with her husband's actions, but the councilwoman informs her that Haranguetan is dead which greatly shocks her. She asks who killed him, but is told the Council doesn't know. With that, she demands the keys to the Haranguetank but is told by Dr. Mrs. The Monarch that she doesn't have them which angers her until she breaks down in tears that it is the only thing left of her husband. Feeling sympathy, Dr. Mrs. The Monarch promises to find the Haranguetank for her and talks with her about her husband until she locates the vehicle at the impound lot. She agrees to accompany the grieving widow who happily accepts the offer and runs to put her costume on.

The two arrive at the lot where Battleaxe knocks out the officer in charge and they go to the garage and locate the Haranguetank, which turns out to be Battleaxe's home. Dr. Mrs. The Monarch leaves Battleaxe with her vehicle while she goes to investigate a noise. Battleaxe then goes through Dr. Mrs. The Monarch's laptop which was left behind by the councilwoman. She attempted to go look up her emails but sees the surveillance video of Haranguetan's attack on VenTech Tower and watches her husband's demise. While watching the video, she spots Dr. Venture leaving the building and The Blue Morpho appearing which makes her believe Venture is responsible for her husband's death. With this new deduction, she angrily drives the Haranguetank out of the lot and leaving Dr. Mrs. The Monarch behind. Battleaxe then swears to avenge her husband's death and speedily heads for VenTech Tower where she nearly crashes into the Guild limousine, and causing her to lose control of the vehicle and strike the villain Think Tank. This act causes the Haranguetank to drive into the entrance of Ventech tower where it crashes and explodes in the hole in the center of the lobby (the same place where Battleaxe's husband died).

Battleaxe is later revealed to have survived the crash, as she appears in A Party for Tarzan, where she is shown wearing bandages and a neck-brace while tending her bar. 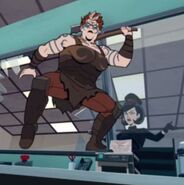 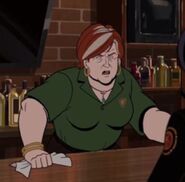 Battleaxe in her regular appearance.

The wounded Battleaxe, back at work.

Ye Old Battleaxe
Add a photo to this gallery
Retrieved from "https://venturebrothers.fandom.com/wiki/Battleaxe?oldid=47911"
Community content is available under CC-BY-SA unless otherwise noted.