Augustus St. Cloud is the wealthy inheritor of the St. Cloud plastics fortune. Spending his vast wealth on collecting, he is the archenemy of Billy 'Quizboy' Whalen and a member of The Guild of Calamitous Intent.

Augustus St. Cloud is the peculiar little scientist with a love for luxury and smoking cigarettes with a quellazaire. He was one of the patrons looking through Dr. Venture's stuff during his tag sale. He was also kicked rather hard in the ass by Baron Ünderbheit after he mistakenly thought Augustus hit him in the face with a pebble, when it was The Monarch who was, in fact, responsible in order to start a riot.

St. Cloud he had a long standing grudge with Billy due to Billy's cheating him out of winning an episode of Quizboys. He has also been bested by Billy before in eBay auctions for comic and cult memorabilia. Watch and Ward invited St. Cloud to join the Guild of Calamitous Intent, in which Augustus bribed them to ensure he would be assigned as Billy's arch-enemy. St. Cloud is defeated by Billy again while on St. Cloud's personally recreated Quizboys set.

Although St. Cloud has this rivalry with Billy Quizboy, his relationship with Dr. Venture is rather amiable. St. Cloud had purchased quite a few items from Venture in the past and thus is in relatively good standing with the man (resulting in Venture not wanting to take sides when St. Cloud and Billy argue).

In their very first official encounter as each others nemesis, St. Cloud introduces his albino-Asian manservant, Pei Wie and demands Pete White from Billy as his prize should he win a Quizboy trivia challenge. His defining features are his short and stout stature, deadpan voice, round dark glasses, and collection of ginger paige-boy style wigs.

Augustus St. Cloud is a collector of television, movie, comic book, and other pop culture memorabilia. In his collection he owns: 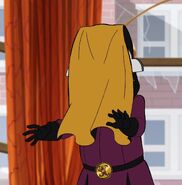 Laugh Attack
Add a photo to this gallery

Retrieved from "https://venturebrothers.fandom.com/wiki/Augustus_St._Cloud?oldid=48639"
Community content is available under CC-BY-SA unless otherwise noted.