Agent Kimberly McManus is a minor recurring character on The Venture Bros. She is a sniper that works for the Office of Secret Intelligence and holds affection for an agent of The Guild of Calamitous Intent, Guild Stranger S-464.

Kimberly first appears in the episode Red Means Stop as an unnamed OSI sniper. In that episode, she becomes quite intimate and falls in love with a sniper named Guild Stranger S-464, also unnamed in the initial appearance. Both the OSI and the Guild are cooperating on a stake-out to catch the second Blue Morpho, whom they suspect will target Red Death for termination. At the end of the episode when S-464 asks Kimberly how he would recognize her, Kimberly reveals herself to be a husky-voiced woman rather than a man. S-464 reveals he had the top of his skull taken off and replaced with a transparent dome with wires sticking out of it.

In The Inamorata Consequence, Kimberly and S-464's names are revealed for the first time. She finds him at the Treaty of Tolerance Summit II trying to find her, she catches his attention and sneaks out to make out with him in the hangar. However, she is shocked and horrified to discover S-464 has "P.P." on his belt and chides him for being so unemotional about it. Dermott Fictel and Hank Venture, who observe the conversation unseen, interpret this as "pee-pee" and eventually report the conversation to OSI and the Guild.

After the credits for the episode play, Dr. Mrs. The Monarch reveals that it was not urine on S-464's belt but rather the initials of the Peril Partnership, as in S-464 is a mole within the Guild. McManus' reaction is explained as loathing for the dishonorable Peril Partnership.

In The Bellicose Proxy, S-464 is interrogated by Dr. Mrs. The Monarch, who uses the threat of torture to convince him to become a double agent to spy on The Peril Partnership. S-464 finally agrees to flip and act as a double agent for the Guild after Dr. Mrs. The Monarch promises to help him patch things up with McManus. They engineer a confrontation with McManus by providing Augustus St. Cloud with a level 6 lightning gun for a level 1 arching, which would call for both Guild and OSI intercession. In the ensuing conflict, S-464 meets McManus again, though she only expresses contempt for him and the Peril Partnership before S-464 can explain himself. McManus' disrespect towards Dr. Mrs. The Monarch causes the latter to become direly offended and blurt out that S-464 had become a double agent and engineered this whole encounter just to meet with McManus. Although McManus is impressed and her heart warmed, Dr. Mrs. The Monarch is still angry and says she will beat up McManus. McManus and Dr. Mrs. The Monarch never come to blows thanks to the intercession of the Monarch and Henchman 21, who had been mentoring St. Cloud during the arching. The Monarch pulls his wife aside, and 21 apologizes to McManus and S-464 before leaving them to settle their differences.

McManus and S-464 apparently never make up, as later in the The Forecast Manufacturer, S-464 uses a stolen Guild's weather machine for the Partnership to cause blizzard over New York City, hoping to make McManus suffer when she hears about it. The weather machine is shut down and S-464 is taken in by Dr. Venture. In the post-credits scene, McManus meets with Dr. Mrs. The Monarch at the Guild Strategic Operations to conduct a prisoner swap with the Guild, trading Black Strap for S-464. Dr. Mrs. The Monarch warns that the Guild "adjusted his temperament" but leaves McManus to check on her former lover. McManus walks in a room to find S-464 lying down a medical gown. McManus tells S-464 that she loves him regardless of what he did. However, S-464 first asks if he knows her but then grabs her and calls for Guild back up against the OSI agent, having seemingly forgotten his former romance with McManus.

In contrast to the rather mild-mannered and unemotional S-464, McManus is brusque and masculine. She takes offense at S-464's seemingly cavalier reaction to her anger at him for working as a Peril Partnership spy. Her hatred for the Peril Partnership seems to come from their refusal to obey the rules of engagement, for which she considers them scum.

Despite her straightforward and rules-abiding nature, this neither means she is ill-suited nor totally appreciative of her duties as a secret agent. During the level 1 arching between St. Cloud and Billy Quizboy, she takes on the facade of a trucker with a broken down big rig to block traffic away from the zone of conflict. McManus expresses disdain for "babysitting" this arching.

McManus ultimately seems forgiving of S-464 after the weather machine incident, only to find to her shock and horror that the Guild seems to have entirely wiped S-464's memory of her from his brain. 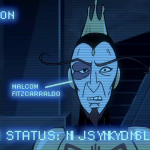 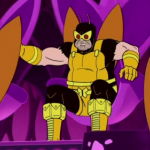