View source
watch 02:24
Wiki Targeted (Entertainment)
Do you like this video?
Play Sound

Action Johnny is a former boy adventurer and recovering drug addict on The Venture Bros.

Action Johnny was a former boy adventurer and child star. He described his life as traumatic, which led to becoming mentally unstable. After his father died, Johnny had been sequestered within a bathysphere, living in isolation and feeding (when possible) his addiction to narcotics.

When he was visited by Dr. Jonas Venture, Jr. and The Pirate Captain, Johnny held them up at gunpoint until he is fooled into handing over a piece of Dr. Venture Sr.'s machinery after being bribed by the Captain and Jonas Jr., an act that Jonas Jr. later regretted.

Johnny later sobered up, but is still a high strung nervous wreck due to his many psychological issues resulting from his father's irresponsible parenting. He was invited to Rusty Venture's "boy-adventurer" day camp, where he claims to a group of young boys that "fathers are caring and protective men, and I don't have one of those". He even expresses the desire to free Dean Venture from his father, but is stopped mid-sentence by Brock Samson. He also implies that he staged several crimes to spite his father, including the murder of their dog Bandit. When Dr. Z makes a surprise guest appearance, Johnny suffered a nervous breakdown upon seeing his old arch-nemesis.

He was next seen in group therapy with several other boy adventurers (a former Wonder Boy, Roboboy and the Hale brothers) and has recovered enough to be functioning, but still on recovery, such as in still having an addiction to drugs, though he has become friendlier and more stable. After the group's therapist was murdered by the Monarch, Action Johnny mistakenly blamed Dr. Z and led his fellow former boy adventurers to Dr. Z's doorstep and confronted him. After Johnny's assumptions of the murder weapon's nature (a snake) proved inaccurate, Dr. Z encouraged Johnny and the other former boy adventurers to let the past stay in the past as Z had. The encounter ultimately ended peaceably.

Later, Action Johnny received treatment for his drug addictions at the Sunnylake Retreat rehab center. Dr. Z visited him as part of a final "arching" before Z retired from villainy to serve full time on the Guild Council. Dr. Z gave Johnny an old Anubis head from one of their previous capers. Dr. Z also told Johnny Ro-Boy and Mrs. Z have given the okay for Johnny to move in with them. After Dr. Z expressed his love for Johnny (in a nonsexual way), Johnny said they should keep things slow and thought it better for Dr. Z to simply loan him some money, and Dr. Z agreed. After an awkward pause, Johnny offered to let Dr. Z chase him around for old times' sake, and Dr. Z heartily took him up on the offer.

Dr. Quest is Johnny's father who would drag him along on adventures. The mere mention of his father sends Johnny into a rage.

According to Hadji, they're like brothers and Johnny's been known to come to his house when he needs money or is strung out.

Dr. Venture is a fellow former child adventurer and both have known each other since boyhood. Johnny likes to poke fun at Rusty due to Rusty looking older than him, despite Johnny being the older one.

Action Johnny's relationship with Dr. Z is ambiguous. Dr. Z was traditionally an enemy of Action Johnny and his father, but after many years, Dr. Z seemed to stop arching Johnny.

In The Buddy System, Johnny encounters Z Dr. Venture's Day Camp for Boy Adventurers, and Johnny becomes hysterical as the past traumas come back to the forefront of his mind.

In Self-Medication, Action Johnny mistakenly blames Dr. for the murder of his therapist and confronts Z, though the encounter ends peacefully with Dr. Z telling Johnny and his fellow boy adventurers to put their pasts behind them.

In The Terminus Mandate, Dr. Z visits Johnny in drug rehab and says to the receptionist that now that Johnny's father is dead, Johnny is the only person from that past he has left. Johnny and Dr. Z have a friendly, if awkward, interaction. Indeed, Dr. Z seems to wish to invite Johnny to stay with the family, saying that Mrs. Z and Ro-Boy have already given their permission for him to live with them. 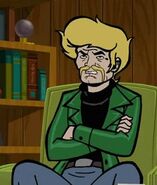 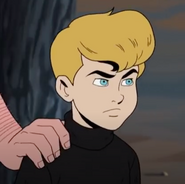 Johnny in his Boy Adventurer days